The Women, peace and security programme launched in April 2014 and implemented by UN women in partnership with the Federal, target state ministries of women affairs and social development, United Nations Children’s Emergency Fund (UNICEF) in Adamawa, Gombe and Plateau State held its final engagement with Stakeholders and Government representatives to mark the end of the program in Abuja on 17th September 2018. 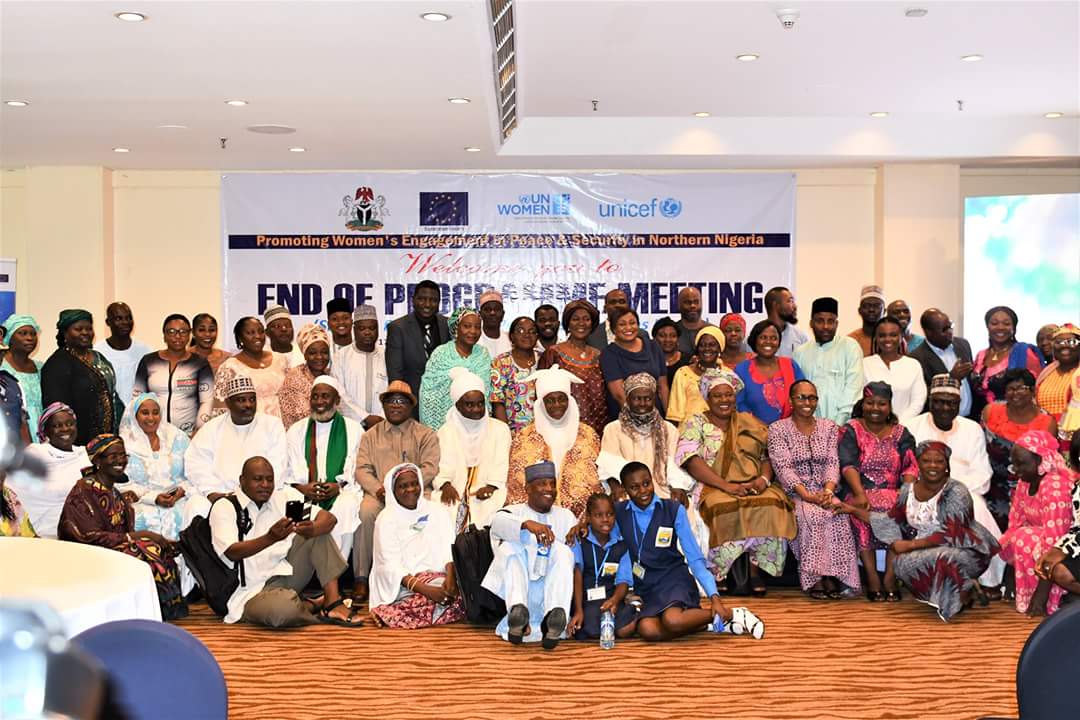 Participants, Representatives of the Media, Non-Governmental Organizations, Government of Adamawa, Plateau, Gombe State together with representatives of Federal Ministry for Women Affairs at the End of Programme Meeting on Women's Peace and Security program in Northern Nigeria Photo: UN Women/James Bigila

The programme, funded by the European Union in Nigeria, with UN Women Nigeria as the overall executing agency has been implemented over the last four years in partnership with indigenous non-governmental organizations across the three focal states, international NGO’s and UN Partner Agencies.

The overall objective of the program was to facilitate the implementation of the United Nations Security Council Resolution (UNSCR) 1325 in three Northern states of Gombe, Adamawa and Plateau likewise to increase protective services for girls and women affected by human rights abuses.

Speaking at the event, Ms. Comfort Lamptey, UN Women’s Country Representative to Nigeria and ECOWAS highlighted some achievements of the program noting that UN Women supported the development of legislative and policy frameworks that contribute to strengthening of women’s participation in peace and security, ”Together with the Federal Ministry of Women’s Affairs and Social Development, UN Women supported the development and launch of the second edition of the National Action Plan (NAP) on UNSCR 1325 in May 2017. The new NAP incorporated issues on post-conflict and crisis recovery that were not in the first NAP.” She further noted that the NAP development process was very consultative, involving stakeholders in the six zones of Nigeria. 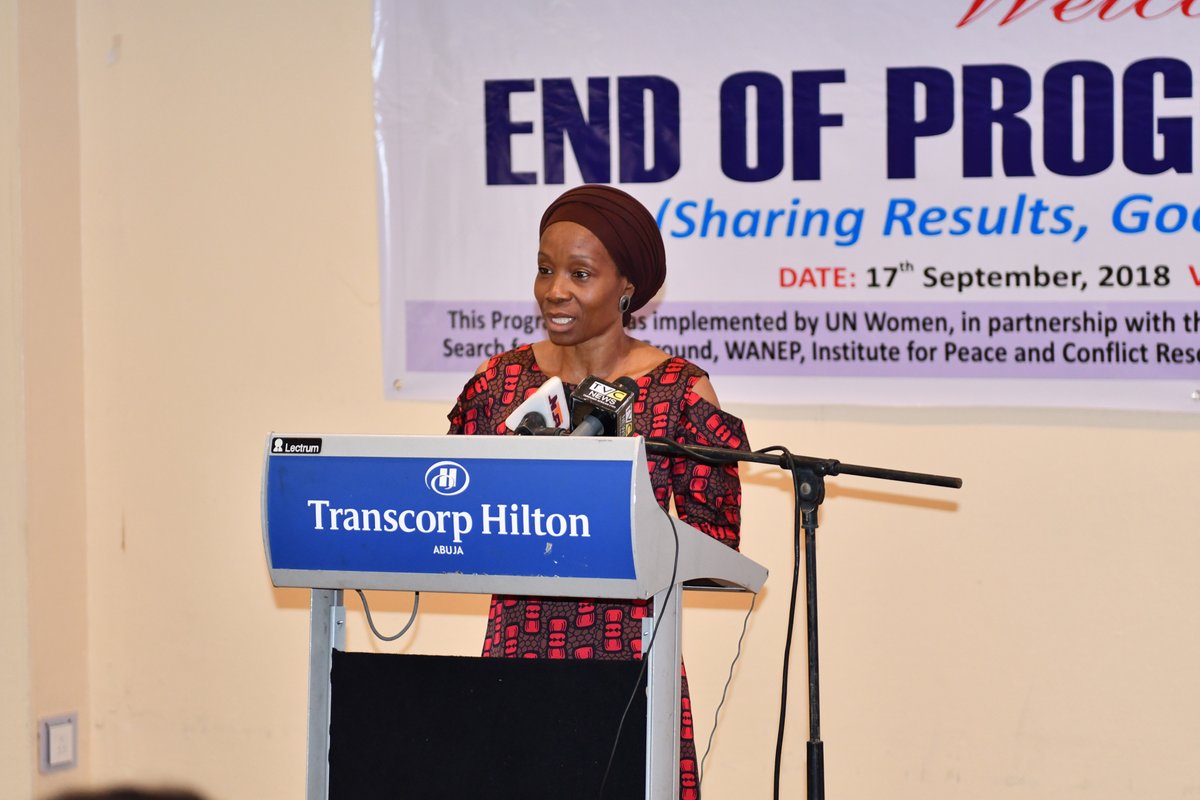 For the first time, State Action Plans have been developed in braille and sign language in Plateau State; and the first time that the National Action Plan has been translated into three local languages.

Ms. Lamptey disclosed that about 8, 862 cases of Violence Against Children (VAC) and Gender Based Violence (GBV) were documented in Northern states of Gombe, Adamawa and Plateau in four years from 2014 to 2018. She highlighted that violence against women and girls, which she described as a scourge continued to threaten the advancement of women adding that one of the key challenges in reducing violence against women and girls were lack of data and evidence.

Ms. Lamptey added that UN Women supported the development of Gender Equal Opportunities bills in Adamawa and Gombe and supported advocacy for the final push of the Plateau bill to be passed into law and to be gazetted.

“The GEOB Act in Plateau is now ready for implementation and the Adamawa Bill has gone through the second reading in the Legislative Assembly,” Ms. Lamptey said. 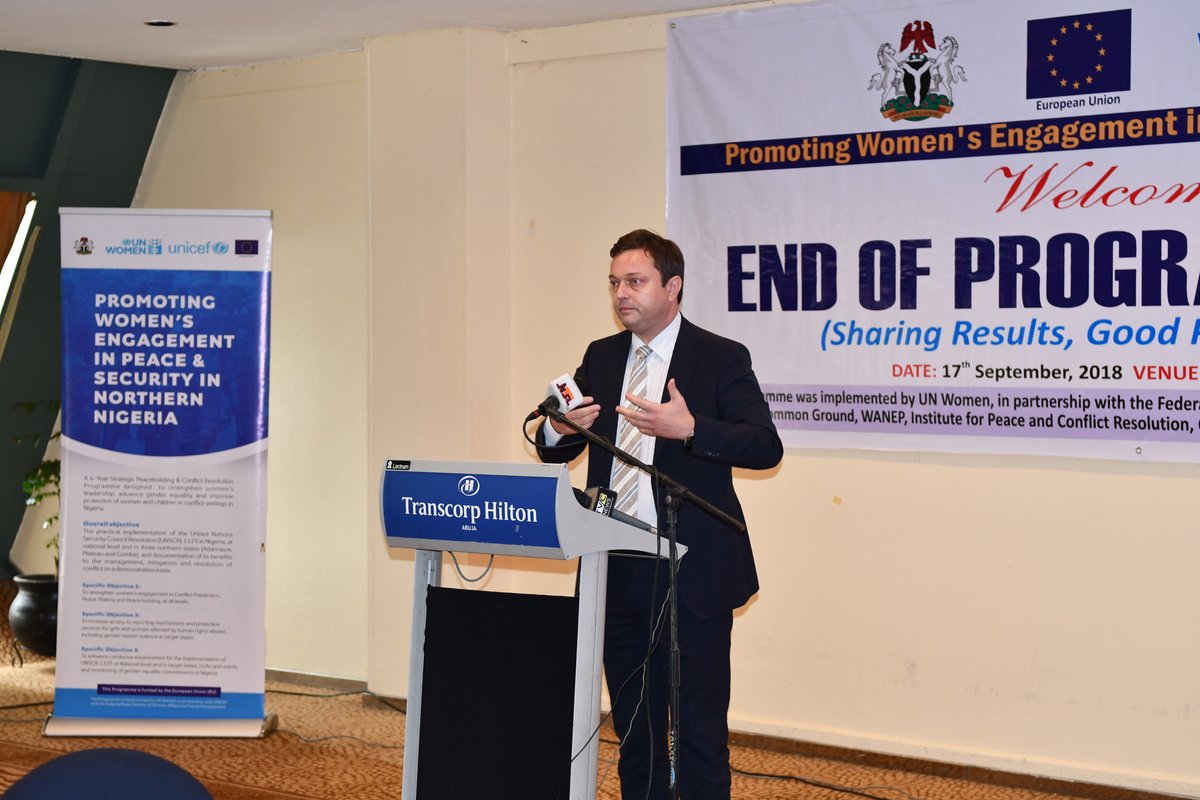 The European Union Ambassador to Nigeria, His Excellency Ketil Karlsen in his remarks thanked UN Women for the work delivered on promoting the engagement of women in peace and security in Northern Nigeria.

“This program is important as it has taken a view to integrate women into all spheres of the society, also integrating women into the traditional institutions in Nigeria”, Karlsen said.

Similarly, Ms Njeri Karuru, UN Women’s program manager for the women peace and security program told participants at the meeting that the WPS Programme further sought to promote the engagement of more women in peace and security institutions and decision-making. She shared the assessment undertaken by UN Women on the peace and security framework in the three states reveals that traditional councils are the first point of contact for communities on security matters. 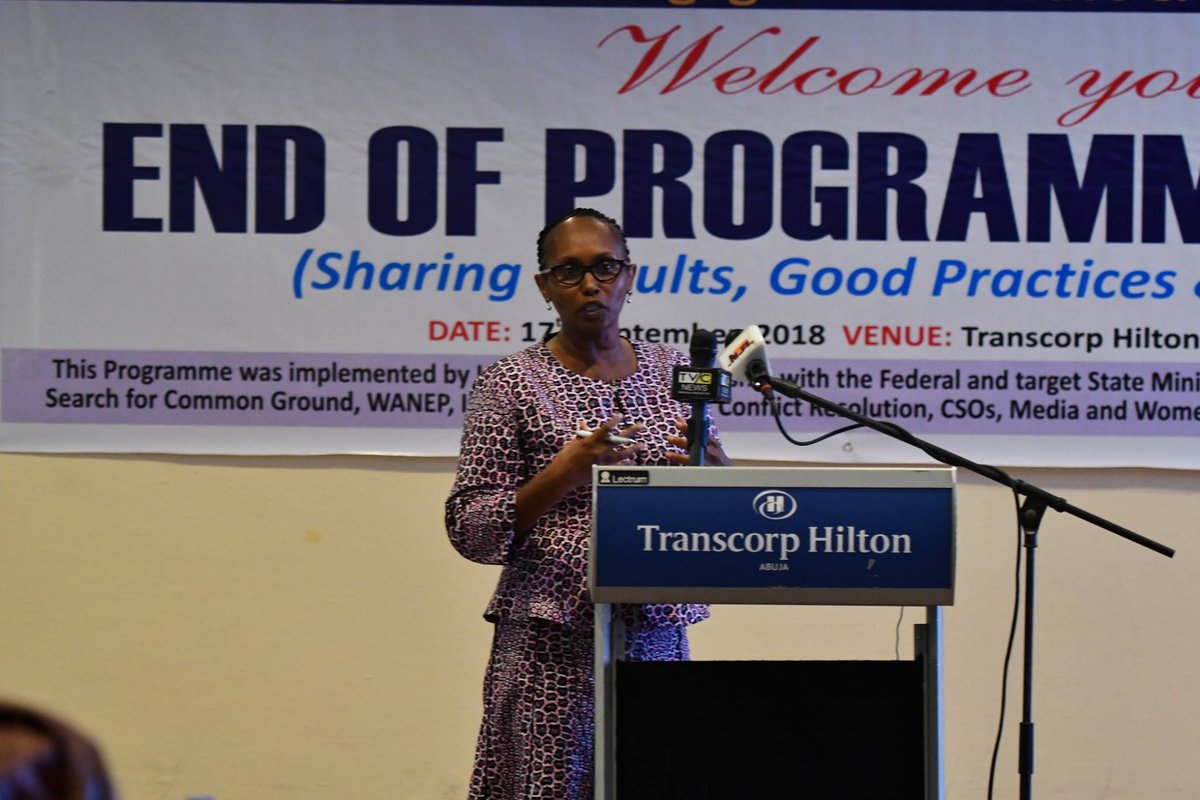 Njeri Karuru, Program Manager, Women Peace and Security speaks on the achievements of the WPS program at the event. Photo: UN Women/James Bigila

“These institutions make decisions on the lives of the communities, for both men and women and yet women do not sit in these councils leading to decisions made being gender insensitive at times. We now have a significant number of women appointed in traditional councils and as administrative heads in all the states. We would like to highly commend the traditional leaders for making this possible,” Njeri added. Ms Njeri further told participants and stakeholders that UN Women partnered with Local and International NGOs to strengthen the early warning and response systems in the three states by training stakeholders and developing structural based indicators that will build on the incidence-based indicators, thus strengthening the early warning system.

The Honourable Minister for Women Affairs and Social Development, Senator Aisha Alhassan represented by the Director Women and Gender, Mrs Anetu-Anne Aliu, acknowledged the positive impact of the program on women’s lives in northern Nigeria including increasing women’s participation in peace processes. She noted   that the Government will work towards partnering with other MDAs and Stakeholders towards continuing the work on women peace and security in Nigeria.

UN Women has worked with the Nigerian media, the WPS Media Network and trained about 160 media practitioners on gender sensitive reporting in peace and security.

The Media Network has over the Programme duration, highlighted women’s peace and security issues in their daily work and have offered tremendous support in educating and disseminating best practice through their various communication channels. 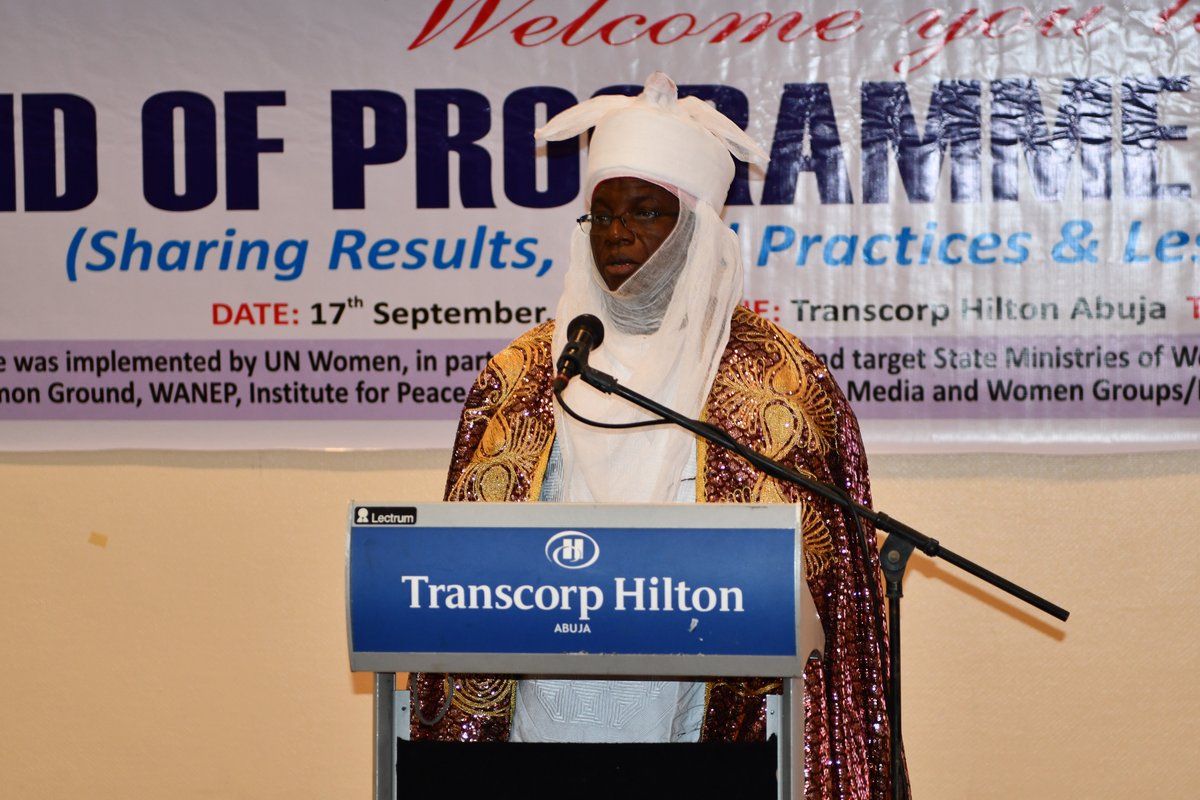 To make the peace and security framework more inclusive, all stakeholders including Government ministries and agencies have been mobilized at the state level, with women mentors being an important group to complement each other to take the work on Women Peace and Security forward.

The implementation of the Programme over the years achieved substantial results at National, State and LGAs levels. As secondary beneficiaries, Borno and Yobe States also benefited through capacity building, exchange of good practice and lessons learnt with stakeholders and beneficiaries in the three target states.

Related News
24/02/2022
UN and Government renew commitment to Women Peace & Security in Nigeria
20/08/2021
Affected by Conflict, yet not broken: “I want the best life for my children”.
01/07/2021
Women, Peace and Security agenda takes centre stage in Benue State, Nigeria
30/04/2021
Placing gender at the center of security sector reforms in Nigeria
08/02/2021
Womens Peace and Humanitarian Fund Call for Proposal
END_OF_DOCUMENT_TOKEN_TO_BE_REPLACED