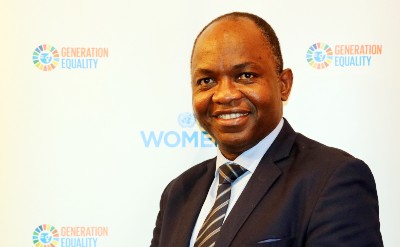 Dr. Maxime Houinato has been appointed as the Regional Director for Eastern and Southern Africa Regional Office Nairobi, Kenya with effect from 1 September 2021.

Dr. Houinato has been UN Women Country Representative in Uganda since 2018 where he contributed to significant growth of programme through the successful implementation of a robust resource mobilization strategy. Before going to Uganda, Dr. Houinato served as Deputy Regional Director of UN Women Regional Office for Western and Southern Africa (2008-2014) and UN Women Country Representative in Mali (2014-2018). Dr. Houinato has been an active member of the UN Regional Quality and Support Assurance Team of the UNDG in West Africa, and a key contributor to UN’s "Deliver as One" model. He supported the design and implementation of a series of positive legislation, public policies, and large-scale programs to promote women’s leadership, the involvement of women in business, and critical value-chains as well as ending violence against women and girls.

Prior to joining the UN, between 2000 and 2008, Dr. Houinato held the roles of Deputy Regional Director (West Africa), and Regional Director (Southern Africa) for Oxfam UK. He also worked for other international NGOs such as Catholic Relief Services, Africare, and the Academy for Educational Development – in various locations including Benin, Ghana, Senegal, Niger, the UK, and Thailand.

Maxime holds a Master of Business Administration (MBA) from Abomey-Calavi University in Benin, a Master of Arts (MA) in International Development from Brandeis University in the US, and a Doctorate (Ph.D.) in Applied Sociology from Cheikh Anta Diop University in Senegal.