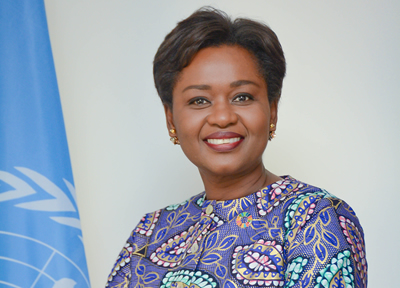 With over 29 years of professional experience, Oulimata Sarr is the Regional Director of the UN Women office in Dakar covering West and Central Africa, with 24 countries under her responsibility.

She graduated from the École des Hautes Etudes Commerciales de Montréal (HEC Montréal) in Finance in 1992 and obtained a Masters in Business Administration in 2002 from the University of Bedforshire in Great Britain. She began her career at Ernst & Young in audit, in Senegal, then spent ten years at the International Finance Corporation, a member institution of the World Bank Group, before joining the United Nations. From 1993 to 2005, she worked as Administrative and Financial Director of Interair South Africa airline based in Johannesburg, South Africa.

She participates in several initiatives that empower women around the world such as Africa2.0, African Leadership Network, Vital Voices, Cartier Women’s Initiative, UnitLife.

Up one level
news