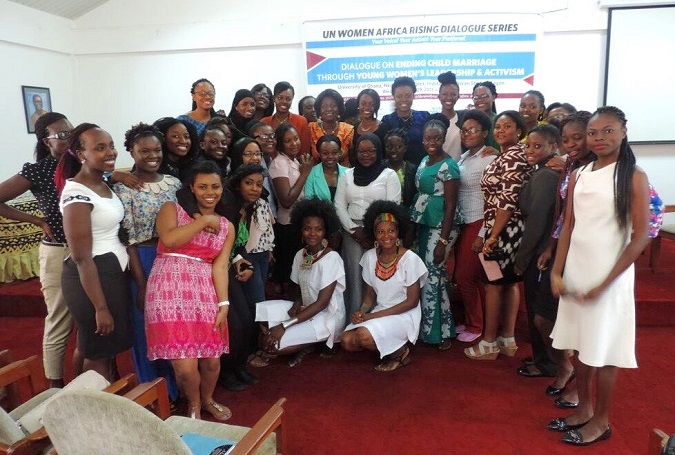 Family photo (Credit : UN Women)
Across Africa and globally, the prevalence of child marriage continues to be an issue of grave concern requiring urgent action. According to UNICEF, in sub-Saharan Africa alone, more than one third of young women are married by their 18th birthday. Furthermore, 9 out of the 10 countries with the highest rates of child marriage are located in the African continent, specifically Niger, 75 per cent; Chad and Central African Republic, 68 per cent; Guinea, 63 per cent; Mozambique, 56 per cent; Mali, 55 per cent; Burkina Faso and South Sudan, 52 per cent; and Malawi, 50 per cent.

In light of the issue, Moremi Initiative for Women’s Leadership (Moremi Initiative) in partnership with the Ministry of Gender, Children and Social Protection, UN Women and several key partners hosted the maiden edition of the Africa Rising Gender Equality Series in Accra, Ghana. The objective of the dialogue was to engage and mobilize various actors in the fight against child-marriage on the continent under the theme “Ending Child Marriage Through young women’s leadership and activism”. Other partners included Ghana’s Ministry of Gender, Children and Social Protection and UNICEF. Eighty-four participants from various backgrounds and sectors were convened. The dialogue which took place at the University of Ghana on July 29th, successfully served as a platform to engage, brainstorm, strategize and commit to action. The format included interactive dialogues, young women’s perspectives, experts’ presentations and strategies and case studies. The various panelists presented the efforts undertaken at both the national and international levels to tackle child marriage.

“This harmful practice of child marriage is a multi-faceted social-cultural practice which negatively impacts the personal development, health and overall wellbeing of children” said Ghana’s Deputy Minister of Tourism, Culture and Creative Arts and Queen Mother of Aflao Traditional Area, Mamma Dzramedo I, highlighting the importance of examining the intersection between culture and governance.

In her remarks, Deputy Minister of Gender, Children and Social Protection/ Member of Parliament of Ghana Hon. Della Sowah, established that child marriage is a deep cultural and traditional issue that has been in existence for centuries. She explained that the most effective approach to address the issue was to look at how culture has evolved and allow that to inform the integrated response to end child marriage. “We have the laws, we just need effective implementation” concluded Mrs. Sowah, reaffirming the government’s commitment to ending child marriage. As such, she presented the Ministry’s national campaign on early and child marriages.

African Union Goodwill Ambassador for Ending Child Marriage, Nyaradzyi Gumbonzvanda presented the African Union continental campaign to end child marriage, launched in May 2014 its key objectives and strategies. Furthermore, she stressed on the importance of solidly sustaining the voice that rejects the abuse, enslavement and gross violations of girls in Africa and globally, through the practice of child, early and forced marriage. “The real solutions lie also with the young women and young people themselves. We must move from vulnerability to voice and leadership. Africa is young, innovating and this energy must be harnessed to ensure that we have lasting solutions. Indeed child marriage is a human rights, human security, governance and development agenda” she stated.

The dialogue provided a space for young women to share their views and perspectives on early and forced marriage and give their testimonies. Addressing the audience, 2015 Malawian MILEAD Fellow, Chifundo Chilera insisted on the fact that it was everyone’s responsibility to contribute to influence social-behavioral and policy change. “When we all participate, it allows for intergenerational dialogues in exploring solutions to end child marriage. When younger and older generations think together, they are more likely to work together in the efforts to end child marriage” she shared. Also, talking about the collective responsibility to put an end to that practice, Human Rights Advocate and Co-Founder of Moremi Initiative, Mawuli Dake insisted: “Child marriage wouldn’t just end. I have a role, you have a role, and we collectively have a responsibility to end it. Organize and take action.”

This first edition of the Africa Rising Gender Equality Dialogue Series in Ghana was well received ad it allowed to propose fresh ideas, new entry points and strategic actions for advocacy, awareness and interventions for ending child marriage on the continent, while engaging audiences across social media across Ghana and the region.

Related News
22/06/2022
UN WOMEN PARTNER WITH UNICEF IN CAMPAIGN AGAINST CHILD MARRIAGES
03/12/2021
Launch of the 16 Days of Activism against Gender-Based Violence campaign: Burundi warns corrupt administrative and judicial authorities who push for out of court settlements in violence against women and girls cases
19/11/2021
16 women championing the fight against Gender-Based Violence in East and Southern Africa
17/11/2021
Annulling one child marriage in Malawi, giving hope to many girls
24/09/2021
Being silent is no longer an option: traditional leaders of Africa intensify their efforts to end child marriage, female genital mutilation and other harmful practices
END_OF_DOCUMENT_TOKEN_TO_BE_REPLACED