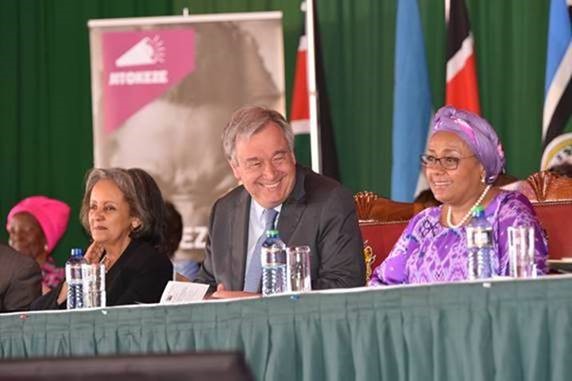 Speaking at the national celebration event in Nairobi, the Secretary-General underscored the need to empower women and girls as the only way to protect their rights and realize their full potential stating that, “Denying the rights of women and girls is not only wrong in itself; it has a serious social and economic impact that holds us all back. Gender equality has a transformative effect that is essential to fully functioning communities, societies and economies.   Women’s access to education and health services has benefits for their families and communities that extend to future generations. An extra year in school can add up to 25 per cent to a girl’s future income.”
During the event, the first lady H.E Margaret Kenyatta launched the joint UN and Government of Kenya project on the prevention and response to gender based violence. The three year, USD 11.5 million, project seeks to improve Kenya’s legislative and policy environment to address Gender Based Violence, create favorable social norms, attitude and behaviors for prevention and response of Gender Based Violence (GBV). This Joint Programme has been designed as a collaborative effort by 14 UN agencies led by UN Women Kenya, UNPFA Kenya and Ministry of Public Service Youth and Gender Affairs. This is in response to the high level of GBV cases in the country. According to the Kenya demographic health survey 2014, at least 41 % of women aged 15 to 49 have experienced physical and sexual violence. 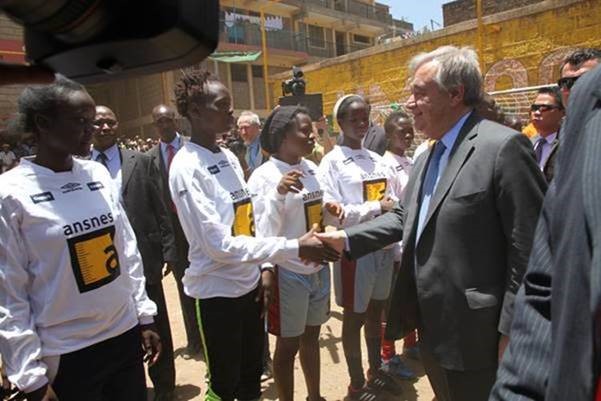 The Secretary-General also visited community members in Mathare, Nairobi to listen to challenges faced by women as they strive for equality within the political process and raise awareness about gender based violence. He interacted with grassroots women political leaders on their challenges in representing marginalized communities and building peace and cohesion in fragile political environments. He further met youth groups that are using sports as a tool for gender empowerment and attainment of the Sustainable Development Goals.

“There are many obstacles to women’s participation in leadership but I am encouraged to see good examples from women here in Kenya.  I am a true believer that when you empower a woman, you empower the whole society.  Women must be included in leadership positions including parliament. They should also be part of peace building and conflict resolution processes. When you have women and men involved in peace processes, better decisions are made.”

At the Town Hall meeting in UNON 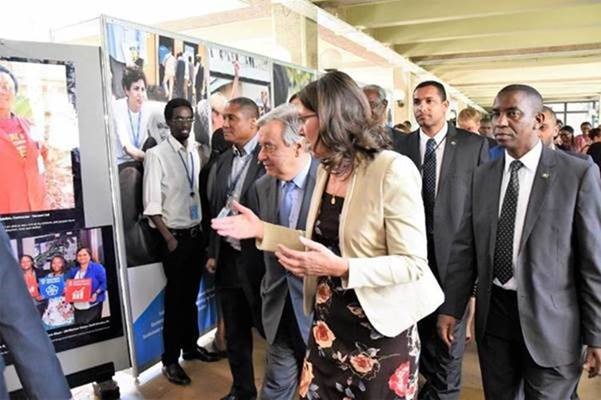 To sum up his visit, the Secretary-General held a town-hall meeting with UN staff based in Nairobi where the UN Women Kenya Deputy Country Director Ms. Karin Fueg introduced him to this year’s International Women’s Day exhibition dubbed "Women of UNON" celebrating female UN staff contributing to the UN across agencies and in various capacities. He also met the Network of Women Leaders of the United Nations Nairobi Duty Station which supports and advocates gender parity for agencies based in Nairobi.

While some progress has been made, it is clear that achieving gender parity is still an issue in Nairobi based UN agencies with fewer women holding senior positions.  In recognition of the challenges many professional women face in their day-to-day lives and in efforts towards advancing their careers, the Network has focused on defining concrete initiatives like mentorship support, leadership skills building, and advocacy-related initiatives, to support the career advancement efforts.  Supporting this initiative, the Secretary General confirmed that his team is preparing a roadmap for parity all levels of the organization.