Beijing +25 Generational Shift: Engaging the new generation of young women leaders and activists on gender equality and the empowerment, and rights of women and girls 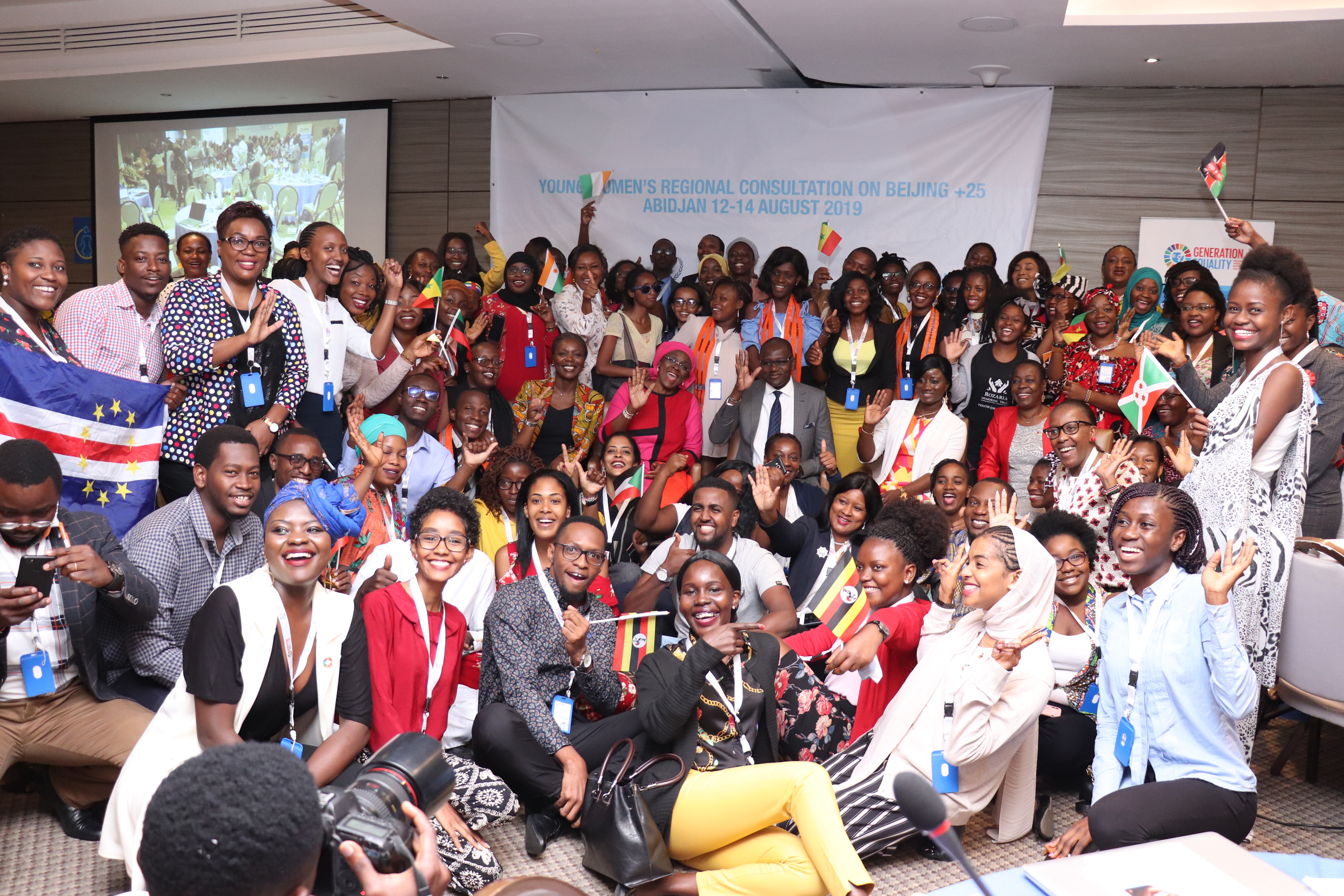 Delegates pose for a group photo at the consultative meeting.   Photo/UN Women

As the world takes stock of progress made in advancing women’s rights and gender equality, by marking the twenty-fifth anniversary of the adoption of the Beijing Declaration and Platform for Action (BPfA) in 2020, the African youth are making their voices heard on their generation’s stand on gender equality and the empowerment of women and girls across the continent. In this regard, young people across Africa, and those in the diaspora - especially women and men between the ages of 15 to 24 years - gathered in Abidjan, Cote d’Ivoire, from 12-14 August 2019 for a Young Women’s Regional Consultation on Beijing +25 to discuss their understanding, contributions and recommendations on the Beijing Platform for Action.

Organized by UN Women in collaboration with Oxfam International and the United Nations Economic Commission for Africa (ECA), the regional consultation aimed at ensuring youth ownership of the Beijing Declaration and Platform for Action, by engaging the new generation of young women leaders and activists on gender equality and the empowerment and rights of women and girls. The consultations sought to address whether this generation of young African Women appreciates the twelve critical areas of concerns as outlined in BPfA and reflect on what has been achieved, and what remains to be done in order to realize the promise of Beijing Declaration and Platform for Action for young women and girls. 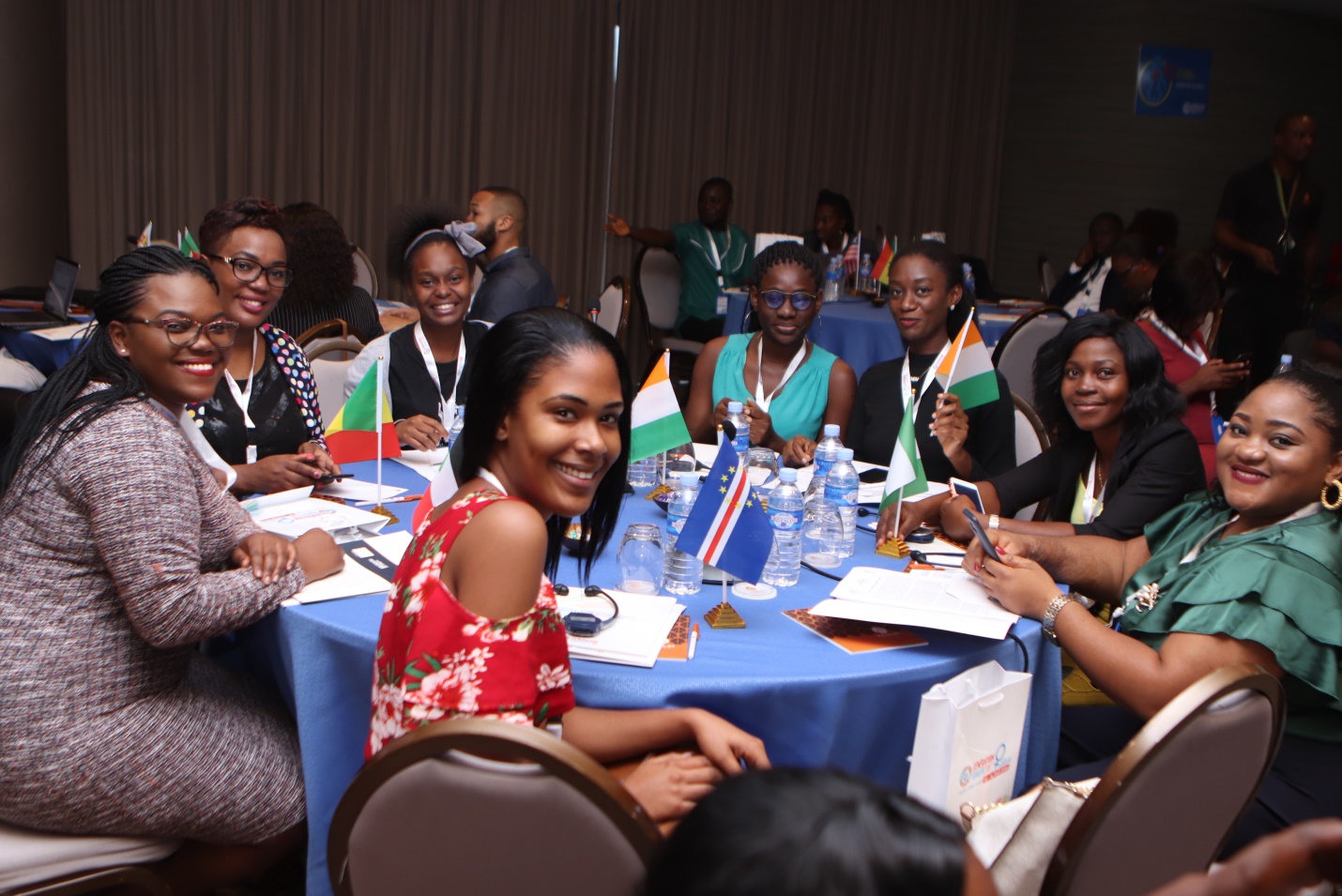 Delegates pose for a group photo at the consultative meeting.   Photo/UN Women

After the opening ceremony, the first day of the meeting began with a presentation of the background paper setting the context on the Beijing Declaration and Platform for Action. The paper gave the conference a quick recap of what the Beijing Platform for Action entails and called for the youth to take the central role and ownership. The paper recognized new trends and emerging issues such as the emergence of technology-assisted violence against women and girls, climate change and environmental disasters, and weight of patriarchal social and cultural norms and structures.

Themed “Power and Patriarchy: Who holds power?” the first day established a direct link between gender inequality and patriarchy, as well as the inter-connections between patriarchy, masculinity, gender inequality and gender-based violence. It was noted that injustice, denial of opportunities and various forms of violence that women and girls suffer from originate from a system (traditional, religious, legal, political, economic, etc.) that establishes and perpetuates men’s domination and hegemony - a power system. 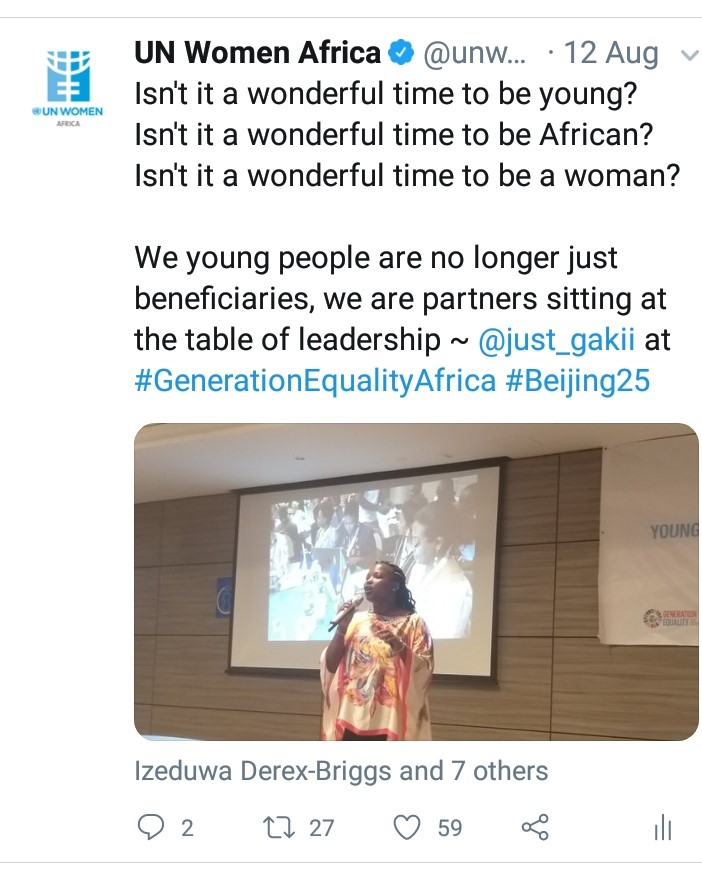 There was a clarion call for all young people to change the conversation from one of victimhood to one of responsibility by shifting from the culture of silence to speaking up, while also engaging men and boys on progressive masculinity.

Day one also celebrated success stories of young women breaking the glass ceilings and leading in various industries, while discussing barriers and entry points for young women to access power in decision making spaces at social and institutional levels. Similarly, the session discussed how young women can utilize the BPfA to lobby for governments to create enabling environment for them to get into leadership, especially by cultivating inclusive practices for minorities and physically challenged women and girls. 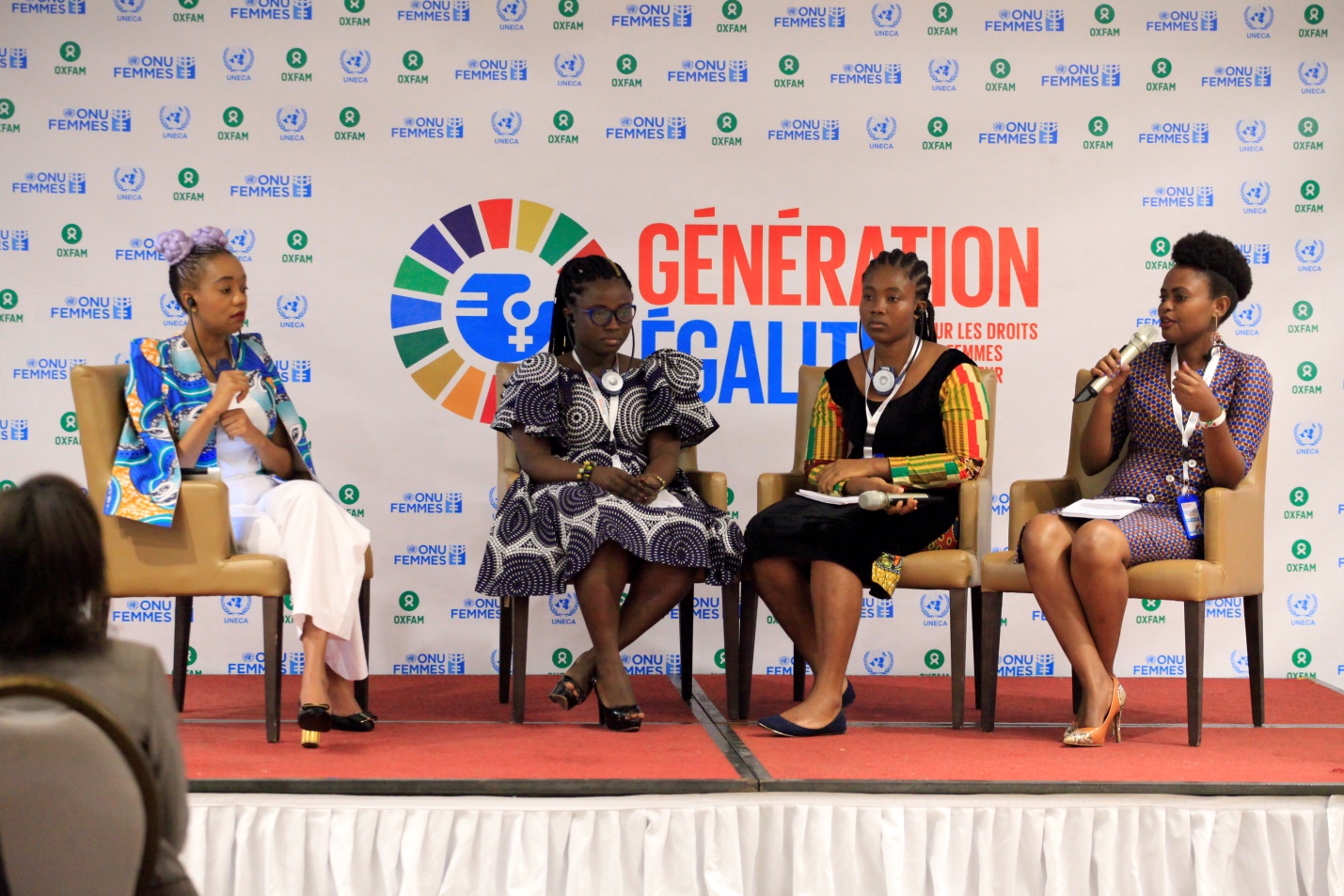 Day two of the consultative meeting was on Women’s Economic Empowerment as Driver of Gender Equity- #MoneyMakers. The meeting acknowledged that women and girls, especially in Africa, have limited access to economic opportunities, social services and decision-making processes due to adverse social and cultural norms that dictate the unequal status of women, their roles in society, control over their own bodies hence denying them decision making privileges. It was noted that the probability of young women accessing decent work is still lower than that of their male counterparts. Additionally, many other tentacles of poverty such as child and forced marriage, inaccessibility to credit and descent job, gender-based violence, harmful traditional practices, among others exacerbates women’s access to economic opportunities.

However, despite these challenges, innovation and startups have become synonymous with young African entrepreneurs making significant contributions within the business and technology sectors, while also promoting social entrepreneurship. Youth entrepreneurship promotes innovation as it encourages young to people to find solutions and ideas to their day to day lives.

Young people emphasized on the need for investing particularly in the entrepreneurial skills of youth, to facilitate the transition to higher-productivity modern sectors. Notable key recommendations and strategies identified in addressing the barriers to meaningful economic engagement of young women and girls  included access to information, shifting from micro to macro, Network building, leveraging on technology, mentorship and training to enhance their skills. Young women also vowed to continue breaking the glass ceilings barring them from taking up traditionally male dominated jobs such as those in the STEM fields. 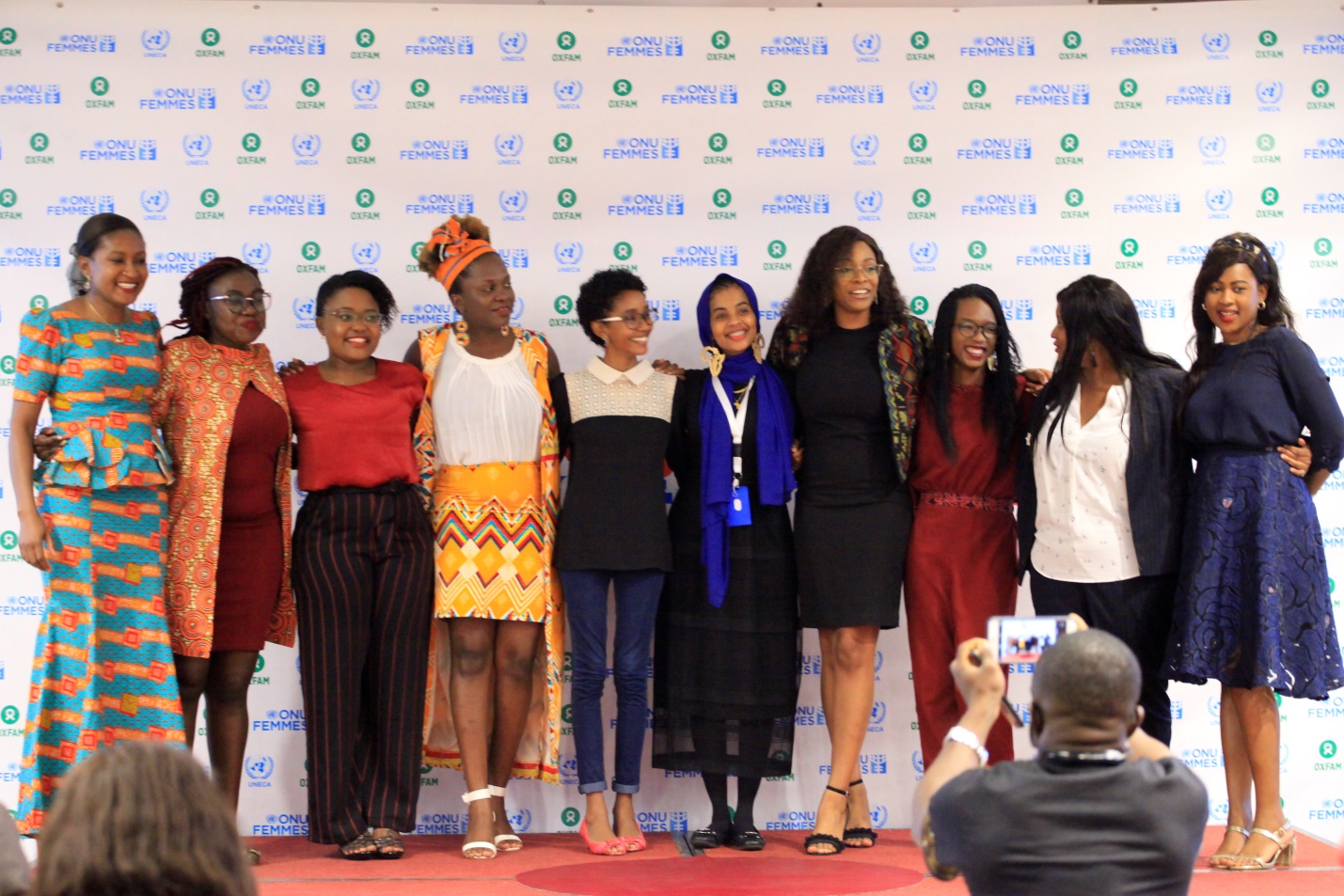 The second day concluded with a series of Ted Talks from extraordinary young African girls sharing their stories on how they have lived by exemplifying the Beijing declaration and the Africa they want. 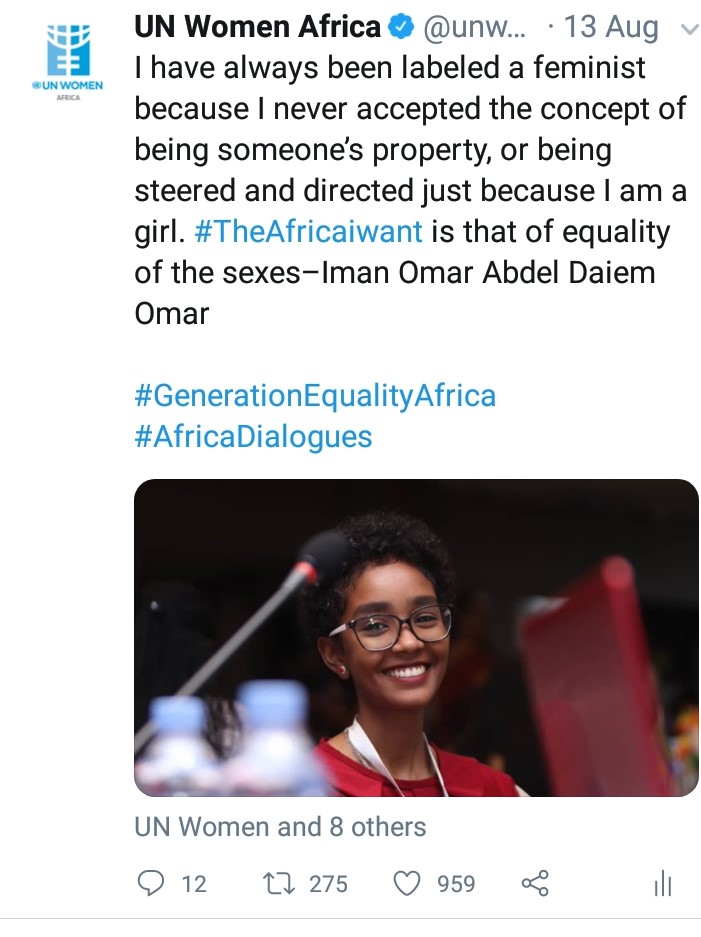 The third and final day of the consultative meeting focused on ending violence against women and girls. The meeting pointed out that although violence is often equated with physical abuse, it can take many different forms. Consequently, different or new forms of Violence against women and girls may increase or arise when societies undergo demographic, political and economic changes, or social and cultural shifts. This includes when new Information, Communications and Technology tools enter the scene. 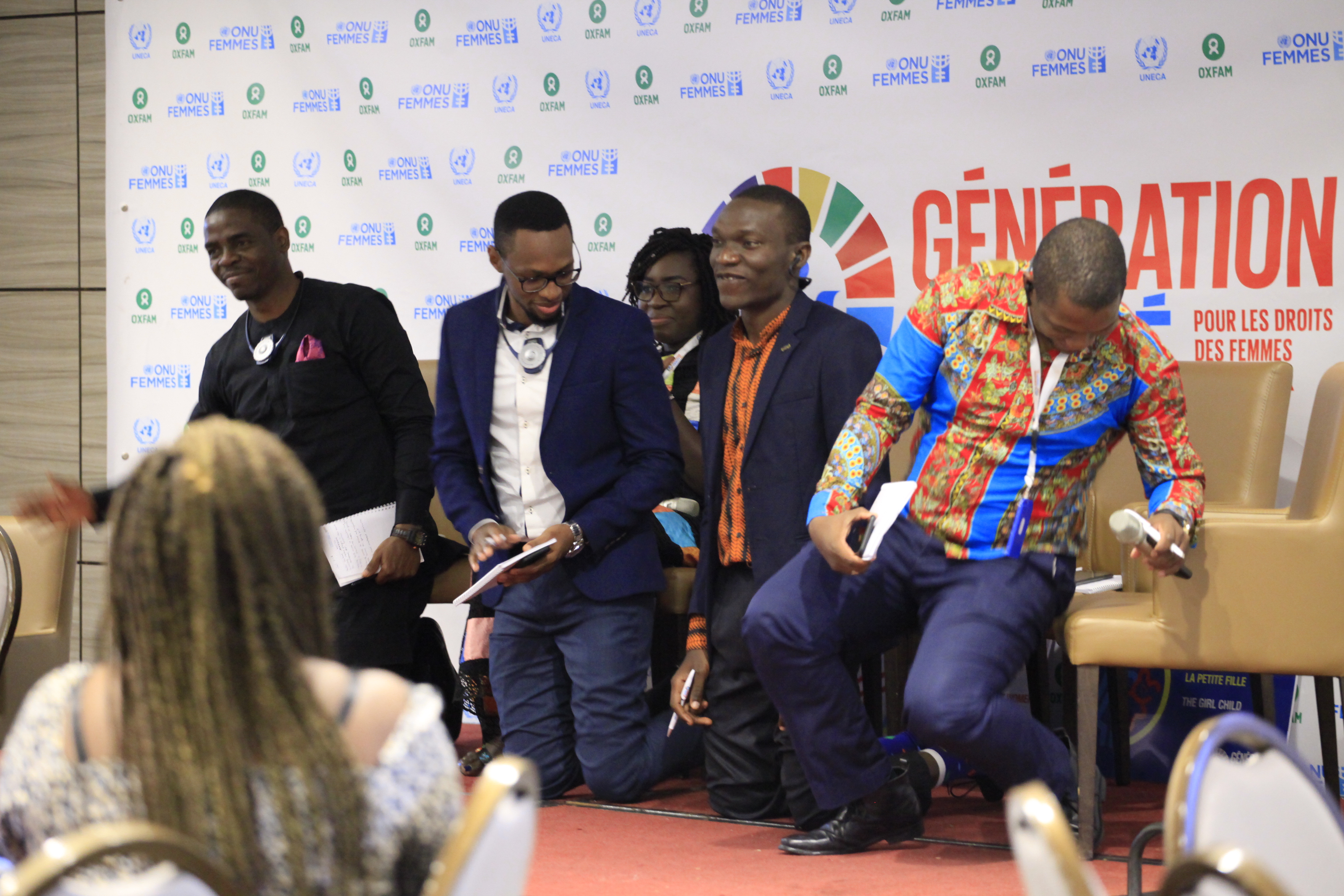 Men panelists and delegates asking for forgiveness from women and girls on the injustices and violence meted by men.   Photo/UN Women

Some of the key outcomes and recommendations were the need to engage all stakeholders in ensuring girls and women are safe both online and offline, there is need to engage men and other stakeholders such as traditional leaders in ending violence, child marriage and other harmful practices, advocating against abuse of young women rights’ defenders in the hands of law enforcers.

The session concluded with an intergenerational dialogues where the technocrats of gender equality and women’s empowerment shared past experiences post the Beijing Meeting of 1995 with the youth. It was agreed that they should mentor young people to be able to voice their opinions  and advocate for a gender equal world. The Beijing baton was officially passed on to the youth to lead progressively for the next twenty five year. 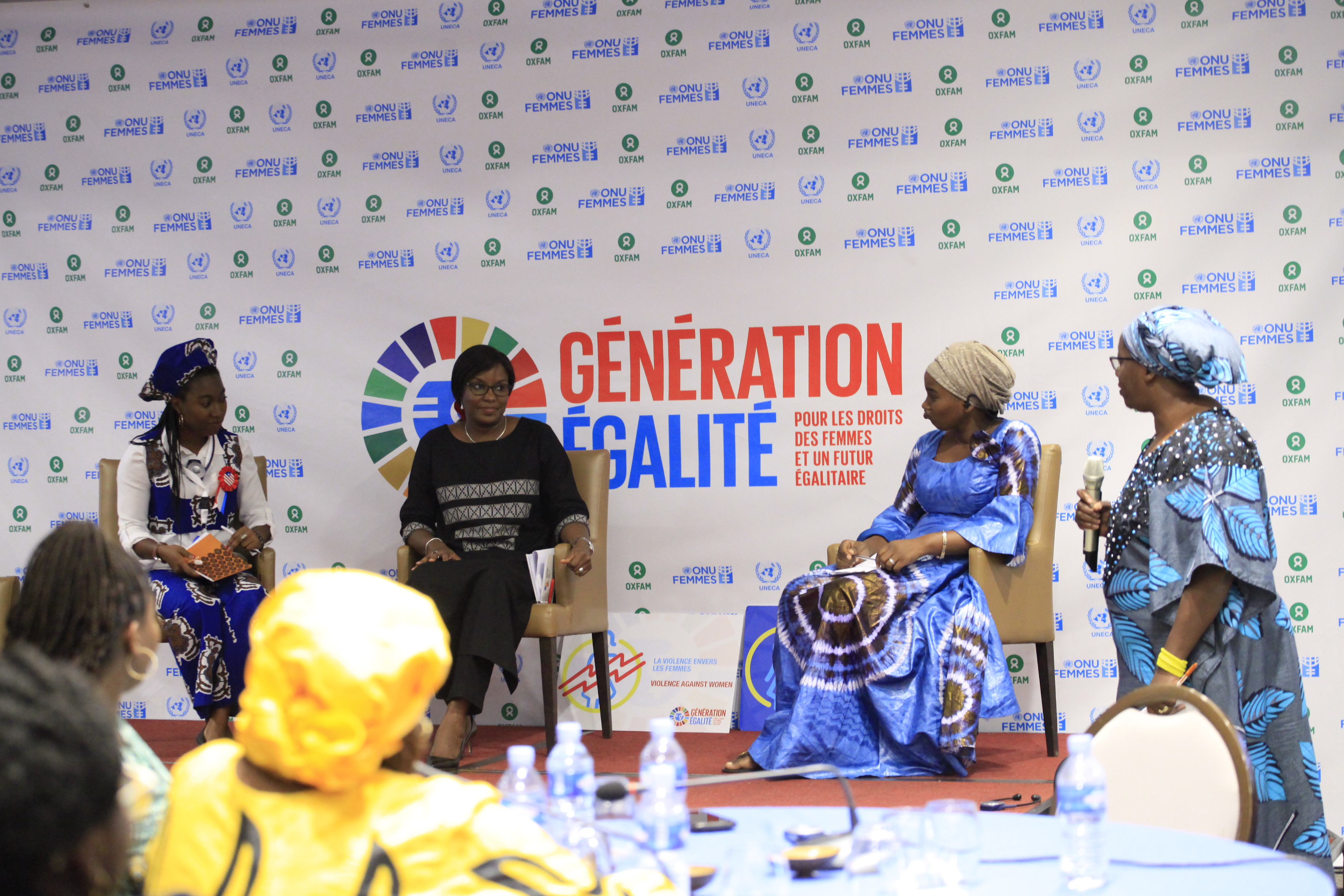 An intergenerational dialogue on passing on the baton.   Photo/UN Women

The consultative meeting concluded with the presentation of the outcome document on Africa’s young women’s position on Beijing +25. The outcomes of this consultative meeting will feed into the Africa Regional Beijing+25 consultations and review, the 64th session of the United Nations Commission on the Status of Women (CSW 64), and the Generation Equality Forums in Mexico and France in 2020, and beyond.

Related News
16/11/2022
Supporting youth employability and entrepreneurship initiatives in Mozambique
09/11/2022
Celebrating Young women in Peace and Security and Launching “The Role and Contribution of Young Women in Peace Processes in Africa” paper
27/09/2022
Terms of Reference for the Africa Youth Steering Committee
27/09/2022
Terms of Reference for the Regional Civil Society Advisory Group (RCSAG) for Eastern and Southern Africa
23/09/2022
Second Chance: Electrical Installation and other skills for adolescent girls and young women in Uganda
END_OF_DOCUMENT_TOKEN_TO_BE_REPLACED