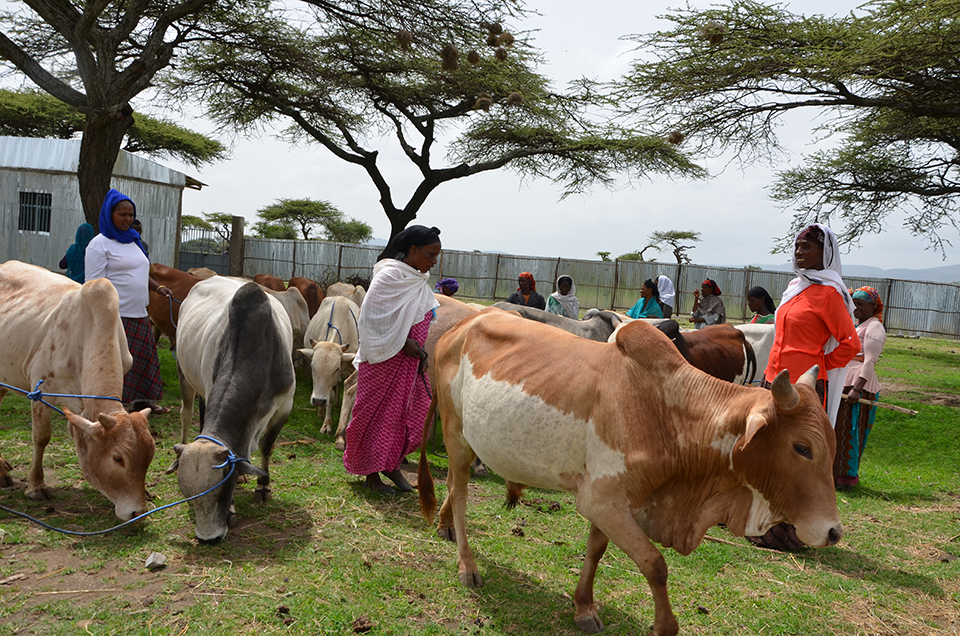 Alima Bakuye with some of the members inside the women cooperative’s newly established modern cattle-fattening facility through the support of the joint programme. Photo: UN Women / Fikerte Abebe

In most parts of the Dodola district, 300 kilometres South of Ethiopia’s capital in Addis Ababa, slow-moving oxen plough open stretches of farmland. In one field, a red tractor is seen speedily tilling women’s cooperative owned farmland ahead of the rainy season. For Kamso Bame, a widowed mother of twelve and owner of a 2.5-acre piece of land, the tractor has shaved off days of gruelling labour.

Bame is among more than 2,000 smallholder women farmers benefiting from a joint UN programme to boost sustainable agricultural production and rural women’s economic empowerment, through training and cooperatives in Ethiopia.

After joining cooperative of women in her village of Wabi Burkitu, Bame received a 7,000 Birr (259 USD) loan, which she used to start a cart-transport service. Bame uses her daily average income of 400 Birr (15 USD) to support her children, four of whom live independently. Her membership also enables her to cultivate the land using a tractor owned by the cooperative.

The tractor is used to farm the land owned by the cooperative as a team, as well as each member’s own land. The cooperative also rents it out to other farmers in 26 villages across the district, whose population is more than 240,000. Charging up to 1,500 Birr (56 USD) per hectare, the cooperative currently earns over 6,000 Birr (222 USD) per day, on average.

For 38-year-old Tulule Knife a member of a cooperative society in Adamitulu district of the Oromia region, the training skills helped her improve her farm yield.

“During the last planting season, I sowed 50 kg of improved wheat seeds using the skills I learned from the training known as line sowing. I harvested 15 quintals of wheat and sold for 15,000 Birr (555 USD) to the community which previously yielded less than a quarter.”

“The impact of the programme has been profound", says Alima Bakuye, chair of the Abune Gawano cooperative in Adamitulu district.

According to Letty Chiwara, UN Women Representative for Ethiopia, agricultural cooperatives especially those established by women in rural areas play a key role in enhancing productivity through sustainable farming practices.

“Injecting basic labour and time-saving technologies, along with the relevant knowledge to smallholder women farmers’ cooperatives is a critical element in the sustainable escalation of the value chain in agriculture. This, in turn, results in the quality of life improvements for women farmers and communities at large,” says Chiwara.

Launched in the regions of Afar and Oromia in 2014, the five-year programme works in partnership with ten cooperatives of 48 to 516 members each. More than 2,000 direct beneficiaries, 14,000 family members and 32,000 community members benefit indirectly.

The joint programme: “Accelerating Progress towards the Economic Empowerment of Rural Women” is implemented by the Government of Ethiopia in partnership with UN Women, the International Fund for Agricultural Development (IFAD), the World Food Programme (WFP) and the Food and Agriculture Organization (FAO). The Government of Spain through the Sustainable Development Goals Fund (SDG-F), and the governments of Sweden and Norway support the programme.

Related News
21/06/2022
National Women’s Economic Empowerment Forum Established
25/02/2022
From Where I Stand: “The last couple of years have been hard because of drought. The decision was always: spend time farming or take the kids to school.”
25/02/2022
From Where I Stand: “When it comes to climate action here, the issue is not the size of land but the utilisation of scarce water sources.”
12/10/2021
From where I stand: “Although women farmers work hard, many remain poor due to multiple barriers”
11/10/2021
Women farmers in Rwanda improve post-harvest handling
END_OF_DOCUMENT_TOKEN_TO_BE_REPLACED