Nearly 1 in 3 women have experienced violence, globally. In times of crises, the numbers may be even higher. Gender-based violence is the most pervasive violation of human rights, but it is neither natural, nor inevitable. It can and must be prevented. Stopping this violence starts with believing survivors and taking action, every day. Through this special editorial series for the 16 Days of Activism, UN Women showcases the voices of survivors, and the transformative programmes that make real differences. 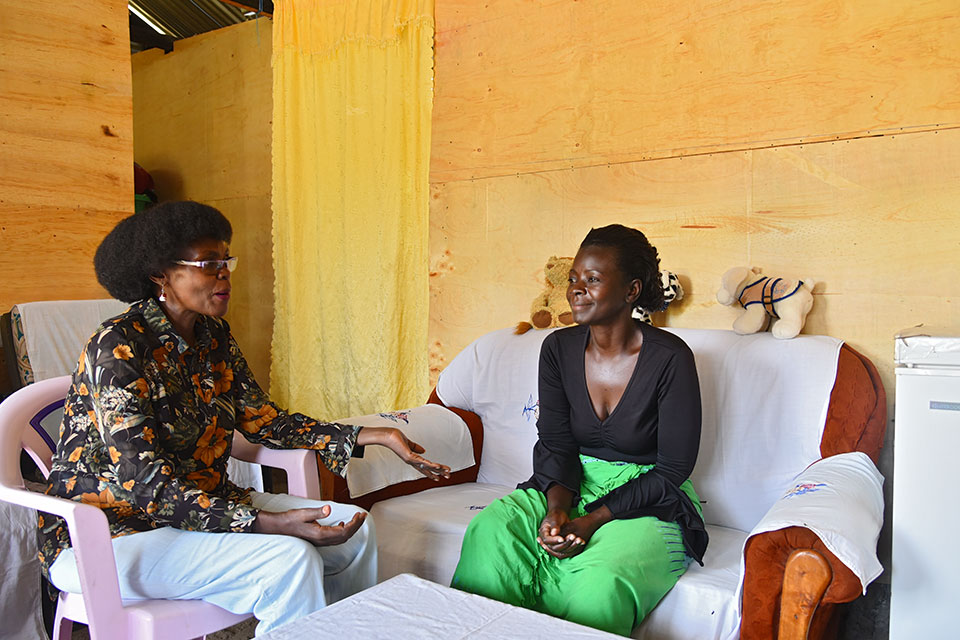 “In 2001, I came back to [Western Kenya] to bury my husband. In the local culture, if the husband dies, the widow is expected to remain in the family’s homestead,” explains Goretti Ondola. “As part of the family, you’re expected to live with your mother-in-law if you don’t have your own property. But they wouldn’t give me food. Everything I came with from Nairobi – clothes, household items – were taken from me and divided between the family.”

Dowries – a transaction of money or livestock from the groom’s to the bride’s family – are still common in Kenya. The dowry paid to Ondola’s family trapped her in a life of abuse for nearly 20 years after her husband’s death. In late 2020, they beat her so badly that she was hospitalised and unable to work.

In rural Kenya, people are often hesitant to go to local law enforcement. Ondola reached out to a local human rights defender instead.

“The human rights defender helped me get to the medical centre and report the case to the local police station. When I reported the case, [the police] said they didn’t have a vehicle to ago and arrest (the culprits). I also learned that the perpetrators had already contacted the police. They even [forged] an agreement in my name to withdraw the case… but I cannot even write,” recalls Ondola.

Human rights defenders in Kenya are often the first responders to human rights violations, including gender-based violence. Since 2019, UN Women and the UN Office of the High Commissioner for Human Rights (UN Human Rights) has been supporting legal training and capacity-building of grass-roots organizations so that they can better assist survivors. The project, funded by the Government of Italy, aims to increase access to justice for survivors and facilitate peaceful elections in 2022.

Caren Omanga is one of the human rights defenders who received the training. She is also the chairperson of the Nyando Social Justice Centre, situated approximately 30 km east of Kisumu, the third-largest city in Kenya. She came to Ondola’s assistance and reported the issue to the local police commander and the courts. Knowing that community disputes are often settled outside state legal channels, she appealed to the local elders as well.

“I was almost arrested when confronting the officer-in-charge,” explains Omanga. “But I knew the community would be against her, so I started the alternative dispute-resolution process, while pushing the case to court. There were a number of irregularities with how the case was handled, so I ensured these were made clear to the magistrate and the prosecutors.”

Ondola’s case was finally settled outside of court with an agreement that granted Ondola her own property and land title, and the perpetrators had to pay fines to avoid prison sentences.

“It is like beginning a new life after 20 years, and my son is feeling more secure… I’m thinking of planting some trees to safeguard the plot and building a poultry house. In our home, I want a kitchen to make life a bit more comfortable,” says Ondola.

Preventing violence against women in Kenya

During electoral periods, Kenya often sees a surge in sexual and gender-based violence cases. Tensions run high, and women bear the brunt of the violence. The Kenya National Commission on Human Rights reported 201 sexual violence cases during the 2017 elections, between August and December. Only 22 per cent of the cases were reported to police, and 54 per cent of the reported crimes were perpetrated by security and law enforcement officials.

How you can take action

Since 2019, with support from the Government of Italy, UN Women Kenya and UN Human Rights have been working in Western Kenya and Nairobi on prevention and response mechanisms to reduce violence against women during elections. Strengthening the capacities of human rights defenders, who are community volunteers assisting survivors, is one of the main strategies of the project.

Wangechi Kahuria, UN Women expert in Kenya, explains that “one of the critical components of the project is to empower the community in sexual and gender-based violence response. They are often the first responders and should therefore be equipped to deal with cases. This means training [them] on responding to survivors, understanding the referral pathways from a legal perspective, but also ensuring that human rights defenders have the support they need, to avoid burnout.”

The project has trained more than 38 human rights defenders in Western Kenya and Nairobi, and 555 survivors have accessed legal aid and psychosocial counselling in 2020.

The project is also working with the country’s senior law enforcement officers to improve internal reporting mechanisms and to facilitate positive reforms within the justice sector. A criminal justice manual has been produced, which guides law enforcement, health and legal aid officers in the appropriate management of gender-based violence cases.

If you have experienced abuse, feel threatened, unsafe or need assistance, help is available. Find helplines here. Learn about some common signs of abuse and how to help here