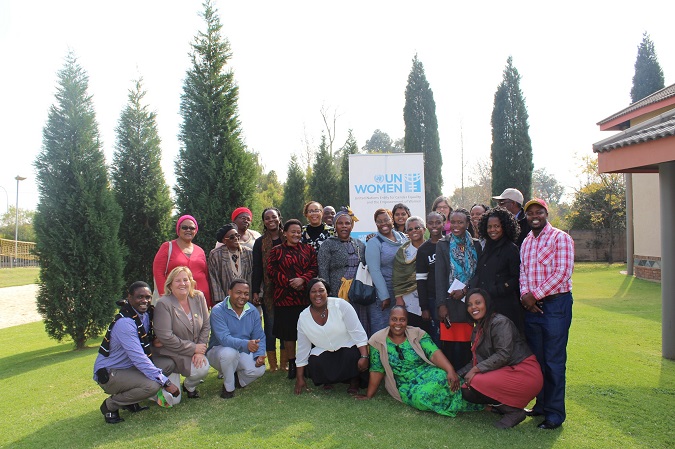 Dumephi Maletshe is a fifty-nine year-old grandmother from Umthetwa Village near Richards Bay, South Africa. For years, Maletshe has been making a living by using reeds collected at a river near her home to weave mats. Recently, however, South Africa has been experiencing the worst drought in more than thirty years, and the reeds have dried up. “Now I have to pay someone to bring me reeds from elsewhere in the province, but I can’t afford to do that unless people pay me for their mats in advance,” says Maletshe.

This was just one of the stories that emerged from a meeting on the effects of climate change on rural women hosted by UN Women’s South Africa Multi-Country Office (SAMCO) in Benoni, Johannesburg, between a diverse group of women smallholder farmers, farmer organisations, faith-based and civil society organisations, rural women’s associations and journalists. The purpose of the meeting was to devise a strategy to address the disproportionate effect of climate change on rural women, while looking at the effects of the current drought as a way to anticipate how climate change might affect them in the future.

The workshop forms part of UN Women SAMCO’s work to addressing the fact that rural women in developing countries are especially vulnerable to the effects of climate change. Drought and unpredictable rainfall patterns, for example, directly affect women’s ability to act as the primary producers and collectors of staple food, energy and water for their households. Climate change, furthermore, cuts across a wide range of women’s lives including food security, water management, energy, human settlements, transport and health.

The workshop focussed on how to address climate change in a way that protects rural women, but also how to ensure that any approaches take into account that, while women, and especially those living in rural areas, are disproportionately affected by climate change, they are also an important part of the solutions to dealing with its effects.

Over the course of the three days, participants shared stories of injuries and sores caused by contaminated water, the difficulty of securing access to land as women, and the drought. The meeting resulted in a declaration outlining the demands of these organisations to heads of state and government, calling on them to address the problems of increasing hunger, poverty and malnutrition in Southern Africa, partly as a result of the current drought, most of the burden of which falls on women,  exposing them to abuse and exploitation.

The declaration also recognizes that women, especially smallholder farmers from rural areas, have less access to natural resources such as land, water, forestry, marine resources, and livelihood support systems than men; that water and air pollution by industry and mining is seriously impacting the health and safety of communities; and that rural women are often excluded from decision-making processes.

Following the workshop, the declaration is being distributed widely and UN Women SAMCO will be highlighting the stories from women like Dumephi Maletshe as part of the “From Where I Stand” editorial series on the UN Women Website, as well as in a  documentary on the effects of climate change on rural women in South Africa, Botswana, Lesotho, Swaziland and Namibia.