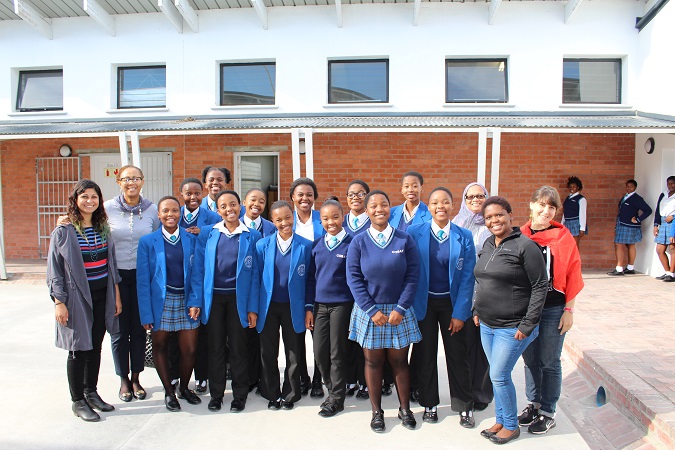 On a sunny autumn morning in Cape Town’s Khayelitsha suburb, the reception area of The Barn, a public innovation hub and workspace, is buzzing. In one corner a group is discussing a presentation. Young women tap on the keys of computers in another. But the most excitement is coming from behind the reception desk, where Peggy Mpahlwa is preparing to teach her first web literacy class.

The Mozilla Foundation aims ensure an open, accessible web and launched Mozilla Clubs to teach web and other digital literacy, including coding, to people across the world. Mozilla clubs meet regularly and in person to learn about web design, content creation, coding, privacy, security and how to make use of opportunities for empowerment and leadership. The Mozilla Foundation sees web skills are a fourth basic foundational skill, in addition to reading, writing and arithmetic.

As Dhalla explains, in order to change this reality, “Mozilla and UN Women will work alongside local educators, organizations and residents to built a network of web literacy clubs that promote peer-to peer-learning, teaching participants how to collaborate with each other and meaningfully participate online.”

In Khayelitsha, Dhalla and her colleague Julia Vallera introduced UN Women SAMCO Representative Anne Githuku-Shongwe and Communications Officer Helen Sullivan to two of the clubs and their club leaders. Dhalla and Vallera had just completed a weekend-long training of new club leaders.

The first club was the one that Mpahlwa would be teaching as part of her first class, and was made up of women, many of them small business owners. Few had used computers before, but as each club member stood to introduce herself to Mpahlwa, it became clear many of them had a shared goals : to be able to use their skills to strengthen their businesses -- for example by creating and distributing adverts online through platforms like Facebook.

The second club the group would meet is a five minute drive from The Barn, at the Centre of Science and Technology (COSAT), a high school dedicated to maths, physics and IT education for the top-performing learners from the surrounding schools.

At the school, UN Women and the Mozilla Foundation were introduced to the school’s principal, Phadiela Cooper, by Baratang Miya, the founder of Girl Hype, an NGO that teaches girls to code. Miya runs a few Mozilla clubs and is helping the foundation to find more opportunities for starting others.

Principal Cooper took the group to the classroom where the grade eleven (the second-last year of high school) students were in their isiXhosa class. Called out of the class briefly to introduce themselves, twelve smiling girls streamed out and give each of the guests a warm hug.

Miya explains that programmes like Girl Hype and Mozilla Clubs help the girls to meet the demands of the IT curriculum at the academically rigorous school, as well as showing them how interesting and useful the subject can be: “I’ve got a love for this school. It’s my best school in the world. If you invest in these kids you get results. We want them to pass the Information Technology subject and get into computer science and stay there.”

Going forward, SAMCO aims to integrate the clubs into other initiatives, including encouraging club members to work on projects targeted at empowering women. Already, Mozilla Club leaders have found that, as part of the women’s and girls’ clubs in Nairobi and Cape Town, members often want to discuss issues such as gender-based violence and workplace discrimination. The clubs are now being adapted to serve the additional role of a safe space to discuss such issues, with a new curriculum that incorporates women-specific issues, as well as an app that will allow club members across the world to engage with each other.