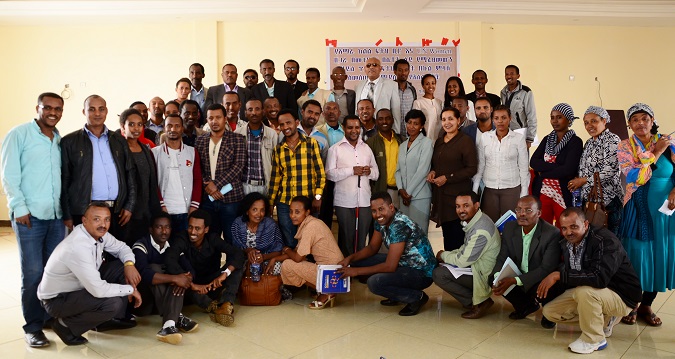 Key Take Aways from the TOT for Justice Sector in Ahmara Region of Ethiopia.

Notwithstanding the commendable normative frameworks for the promotion and protection of women’s rights put in place by the Government of Ethiopia, enforcement still remains a challenge. Law enforcement agents and the justice delivery sector lack the capacity, skills and commitment to handle cases of Violence against Women and Girls ((VAWG).  To address this gap UN Women partnered with the Amhara Bureau of Justice to develop the knowledge and skills of law enforcement professionals in Amhara Regional State.  A Training of Trainers (TOT) for 170 participants including Police Officers manning Child and Women Friendly Protection Units, Public Prosecutors and Judges was held from 11--22 April 2016 in Injibara District, Amhara region.

The participants benefitted from a training package which included modules on how to handle and deal with cases of violence against women and girls at all stages including investigation, prosecution and adjudication.  Practical cases and exercises enabled participants to evaluate and identify the challenges in their daily work and acquire skills and methods to appropriately respond to VAWG cases.

In his opening speech, Mr. Firdie Cheru, Head of Amhara Bureau of Justice, highlighted that it was the Amhara Regional Government’s priority to build the capacity of law enforcement bodies and share experiences and improve their skills on gender responsive justice delivery in the region. “These legal experts know the law very well. However, there is a big gap in terms of how to interpret and apply it in order to guarantee the protection of women and children.  It is key to enable these three bodies to reach consensus on how to address the challenges they face. This will result in better service provision for survivors of violence and will translate in better justice service for the society at large”, he noted.

The participatory approach of the training allowed participants to exchange experiences, views on key constraints and reach consensus on the following main issues among others: limiting the accused bail rights of VAWG suspects, the importance of setting up women friendly benches and hearings victim’s testimony, the risk of victim blaming, the need for the police and prosecutors to jointly investigate VAWG cases and secure moral damage for victims of violence, link with shelters for additional support and the importance of Judges’ involvement in validating and requesting for more evidence on VAWG cases given that Ethiopia follows an inquisitorial judiciary system. 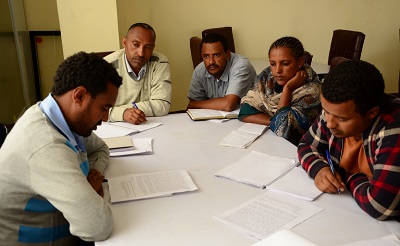 Some take aways from some of the participants are worth sharing:

The training showed me the gaps that existed in legal and enforcement institution and I learned on the ways that I can contribute to fill the gap”. Ms. Anguach Fante, Public Prosecutor, Semen Gonder, Gonder Town, Amhara region who also highlighted the importance of linking survivors with shelters, when they require additional support, as something she had learnt during the training. 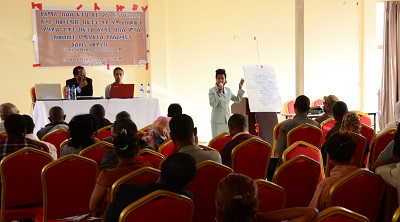 Ms. Firehiwot Abebaw, a Public Prosecutor (civil bench) from Amhara Bureau of Justice, noted “After the training, I am now committed to ensure that women and girls are awarded adequate moral and material damage compensation”.

Mr. Temsegne, President of the High Court in West Gojam district stated, “I’ve worked as a judge for 11 years from local to Federal level, mostly in a criminal bench. In all those years, we used to treat cases of VAWG just as ordinary criminal cases. Now, I have learned that they require special priority and attention. Thus, I will make sure to establish a special bench for these cases, also, will train our women judges specifically and I will make sure that they are the ones assigned to handle them.”

One positive outcome of the training was an agreement among all the participants on the importance of hearing the victim’s testimony in court as a key part of the examination processes testified by one of the participants; “In most cases, judges tend to focus on the evidences provided by the prosecutor and the accused and forget to involve the voice of the victim which is very important especially in cases where there are no direct evidences to the crime.”

UN Women and the Amhara Bureau of Justice have committed to follow up and monitor the outcomes of the training, in ensuring that justice is served for survivors of violence in Amhara Region.

About the Programme: This training was undertaken as part of UNW ECO’s EVAWG programme, which aims at supporting women and girls in Ethiopia to access justice and protection services, while also working towards the prevention of violence against women/girls. The programme is funded by Irish Aid, Royal Danish Embassy and the Embassy of France in Ethiopia.