The northern regions of Côte d’Ivoire hosted a high-level field mission of the Ambassador of Japan in Côte d’Ivoire, accompanied by a delegation from the UN Women Country Office, the Minister of Woman, Child Protection, and Solidarity, the Ministry of Defence, and representatives of the NGO Caritas on June 22nd to June 25th 2017. After three months since the closure of the one-year Japan funded project: Anticipating and preventing women and young girls vulnerability to terrorism through their empowerment, community dialogue and education in the Northern part of Côte d’Ivoire- the visit aimed to evaluate the quality of the implementation of the project’s activities and the impact on targeted beneficiaries. 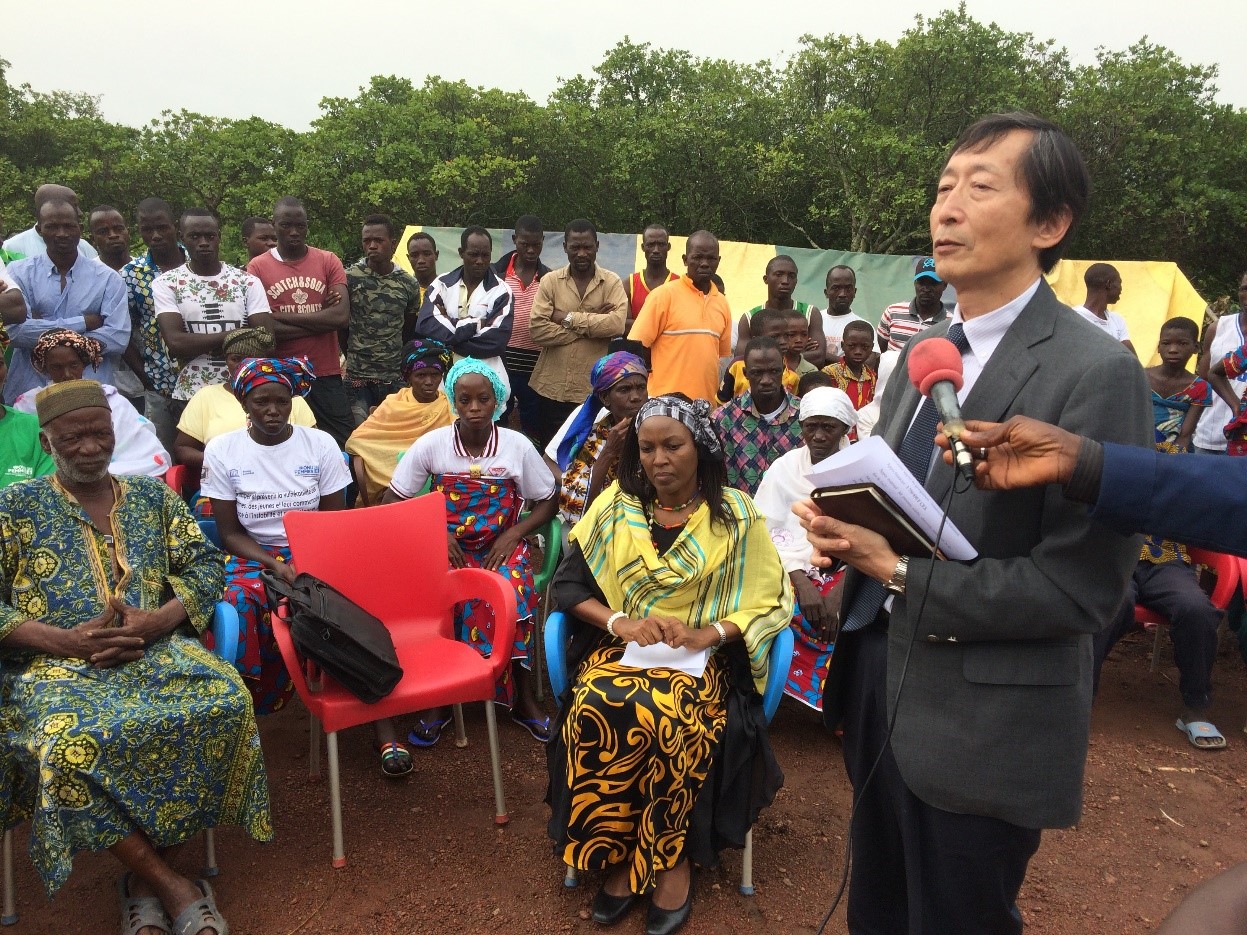 The Ambassador of Japan, H.E. Mr. Kawamura Hiroshi, giving a speech in Koro Oulé to the women who have benefited of project’s funding to start a chicken breeding |Photo credit: UN Women, Laura Zini

The project began in April 2016 and has then been implemented in three regions (Folon, Bagoué, and Poro) in the north of the country by the UN Women Office in Côte d’Ivoire, in close collaboration with the Minister of Woman, Child Protection and Solidarity, the Minister of Defence, and with the technical support of Caritas in Folon Region, FEV in Bagoue Region, and AIP in Poro Region. The Government of Japan generously provided funds to UN Women and its implementing partners to intervene and implement concrete community-based interventions in fragile rural settings, reaching about 84,720 beneficiaries.

The areas affected by the project have been long known for the alarming indicators of the social and economic status of the population, especially regarding women and young girls. According to the data (PND 2016-2020, Tome 1, Diagnostic Strategique de la Cote d’Ivoire sur la Trajectoire de l’Emergence, I.2.2 Profil de la Pauvreté) 70,1% of the population in the Folon Region live below the poverty line, a condition exacerbated by the unstable political and social situation caused by the recent elections in 2016 and the growing threat of violent extremism from neighbouring countries, Mali and Burkina Faso in particular. In such a context, women and girls are exposed to higher rates of Gender-Based Violence (GBV); it is reported that 70% of women have experienced Female Genital Mutilation (FGM), 60% are exposed to physical violence in their households, and 50% are married before the age of 18. Additionally, illiteracy is highly widespread, and 80% of women between 15 and 45 years are uneducated. 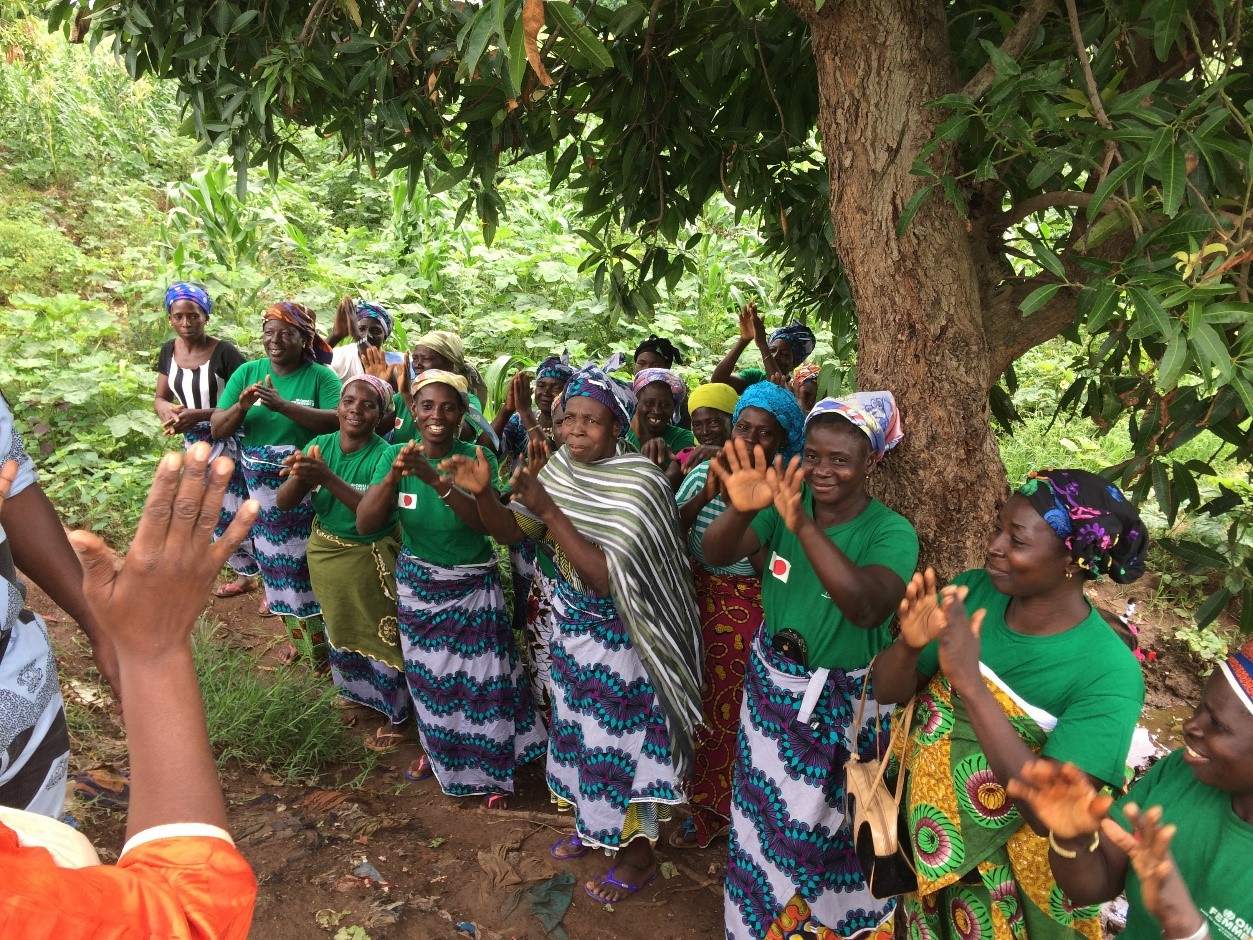 Women beneficiaries welcome the Delegation in the field where they grow their crops, Korhogo |Photo credit: UN Women, Laura Zini

As of the constraints characterizing the project’s intervention areas, the implementation strategy has seen the adoption of a holistic approach based on the economic empowerment of women through the promotion of revenue-generating businesses, the fight against GBV through awareness-building and training, and the prevention of violent extremism through the enhancement of community dialogue in partnership with local authorities and the national security forces, army, and police.

The four-day field mission offered a unique opportunity for the Ambassador of Japan, H.E. Mr. Kawamura Hiroshi, and the entire delegation to learn first-hand about the improvements that have taken place and especially the implementation of the project’s activities and the constant monitoring and support provided to the beneficiaries over the one-year period.

The Ambassador and the delegation were warmly welcomed by local authorities in the districts of Odienné, Minignan, Koro Oulé, Kaniasso, Boundiali, and Korhogo. The exchanges highlighted the commitment and gratitude towards the efforts deployed by UN Women, the Ministries and the local implementing partners to make this project a real success for all beneficiaries. Local authorities have expressed the desire to keep the activities going, despite the completion of financial support from the Government of Japan, and have committed to reduce women’s vulnerability from internal and external threats and to advocate for women’s access and ownership of land. 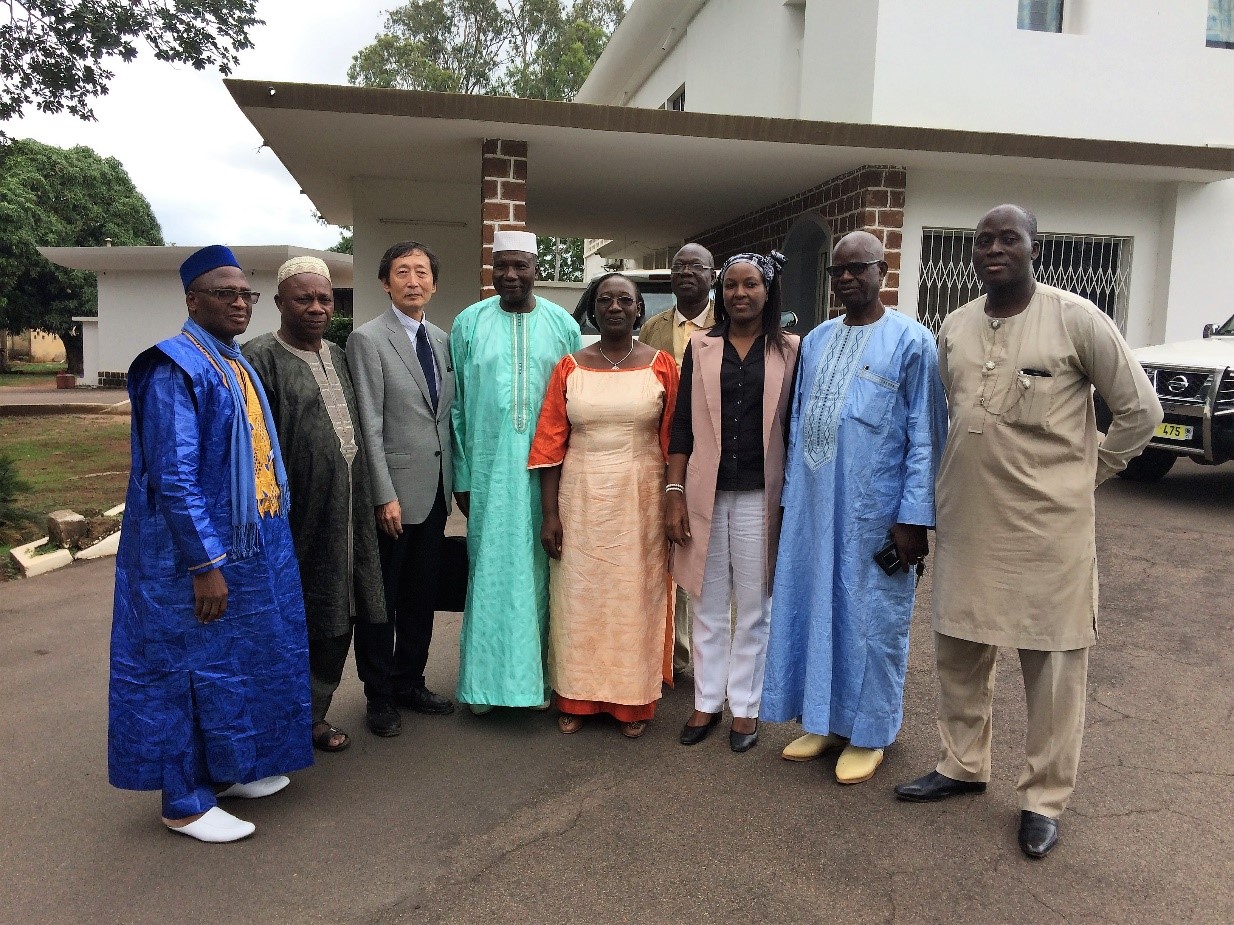 Visit of the delegation to the local authorities in Korhogo on Äid el-Fitr day |Photo credit: UN Women, Laura Zini

The delegation visited several groups of female beneficiaries to learn about their businesses and how they are able to sustain them thanks to the revenue they acquire from increased entrepreneurial skills, advice, and oversight they have received from the project. In Odienné, young women have learned tailoring skills and now have an atelier that runs thanks to the money they make producing clothes for their clients; another group of women have been supported and trained to run a pastry shop; in Minignan, women produce and sell attieké, a local couscous made from cassava, with machinery provided by the project; in Koro Oulé women have a chicken breeding business that continues to expand thanks to the revenue they make by selling chickens at the market; in Korhogo, women farmers have improved their production and are better equipped to run their business thanks to literacy trainings.

Women’s economic empowerment has been fostered through capacity building, literacy training, and provision of equipment to run the businesses. A micro-credit component has been added to make the women responsible for the production and sale of their products and for generating revenues. On the side, activities have been implemented to reduce the incidence of GBV. In particular, a platform composed of different actors, from medical personnel to representatives of the Ministry of Woman and defense forces, has been put in place to raise awareness of GBV and initiate procedures to take victims in charge. Social cohesion and community dialogue has been strengthened through the organization of workshops addressing women, young girls, men, and religious leaders, while training to prevent the insurgence of violent extremism have been given to security forces. 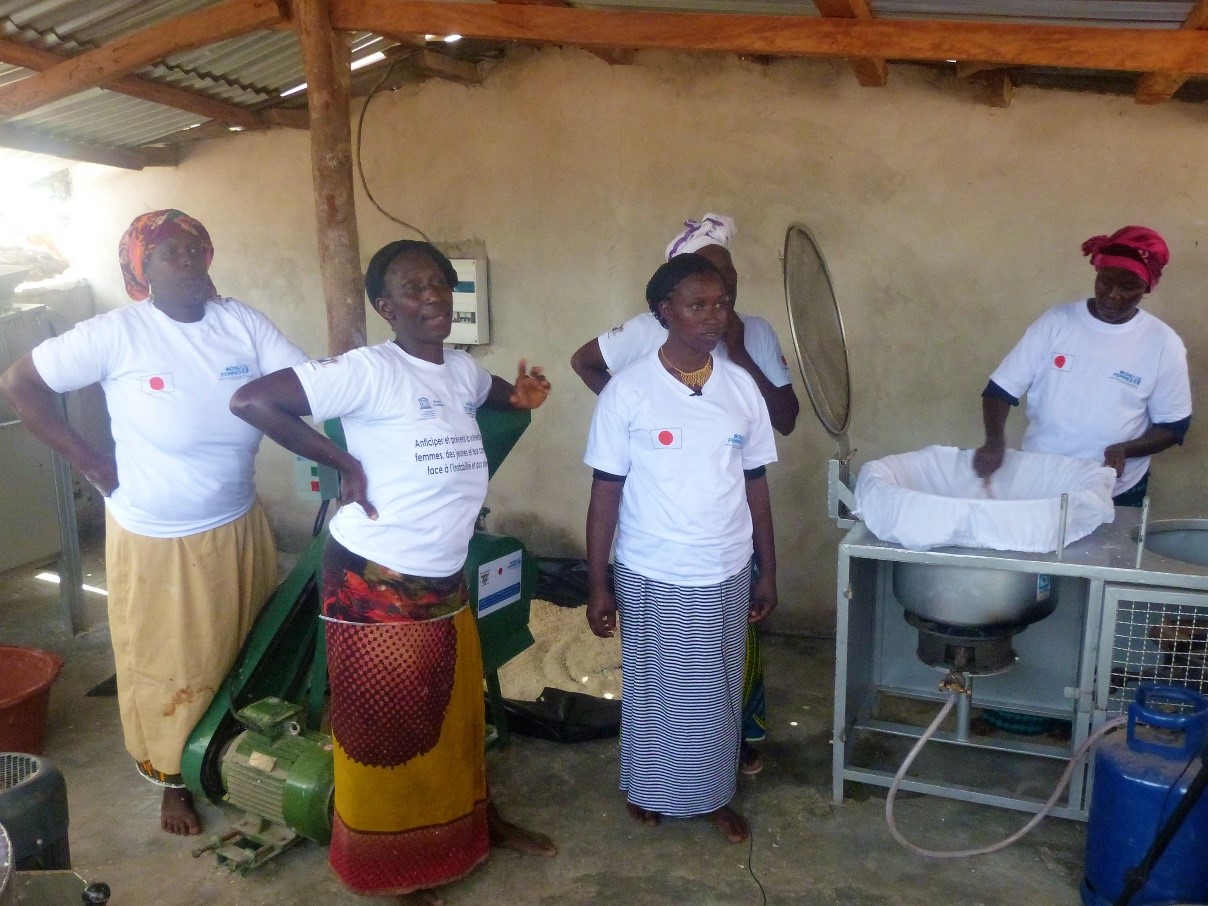 The economic empowerment activities carried out by the project have greatly contributed to increasing women’s pride and self-confidence. As stated by one of the beneficiaries, “I now feel I can contribute to the good of my family; I can send my children to school, I have my own money to buy food, and I don’t have to ask my husband anymore.” During the visit the delegation was able to appreciate the women’s achievements, as well as men’s commitment to be on the side of their spouses and support them in their new roles. A conversation with the husband of one of the young women working in the sewing atelier, encouraged the UN Women Country Representative to honour him with the “HeForShe” pin, in recognition of his support towards his wife. 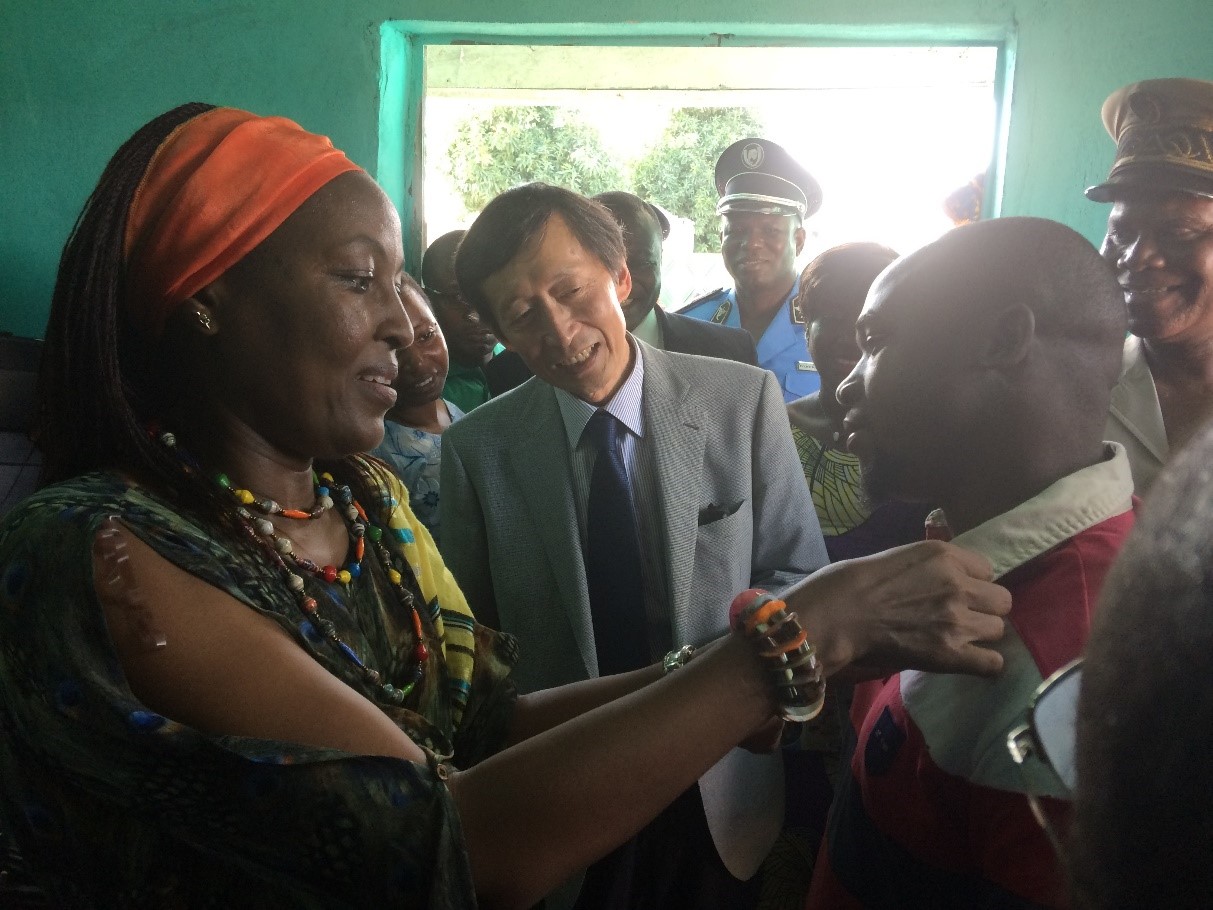 A visit to a care centre in Kaniasso and a radio station in Minignan have demonstrated the holistic approach adopted by the project. Local community radios have been used to raise awareness among the population on the issues of GBV and national security, and to strengthen social cohesion. The use of local language has facilitated the spread of messages, easily understood by all citizens, including illiterate women and young girls.

The field visit has been packed, but highly appreciated by all the participants, especially the Ambassador. He has shown sincere interest in the impact of the project and has been delighted to listen to the testimonies of women beneficiaries on how the project has changed their daily life and has provided the tools to improve their lives and those of their families and children.

As shown and demonstrated by the women visited by the delegation, development is only possible when all members of a society are involved and empowered and can contribute for the good of their own communities. The needs are still present and must be met to help rural women achieve their full potential. However, the one-year project funded by the Government of Japan represents a best practice in terms of planning, implementation, partnership building, and coordination, that should be looked at when intervening in similar contexts for the empowerment of women and girls.