Giving girls a second chance at education in Zambia

For Violet Namwaba, a 20 year old grade 12 pupil at Chama Boarding Secondary School, a second chance at education means she can hope for a future as a nurse while providing for her only child, a daughter of five years. 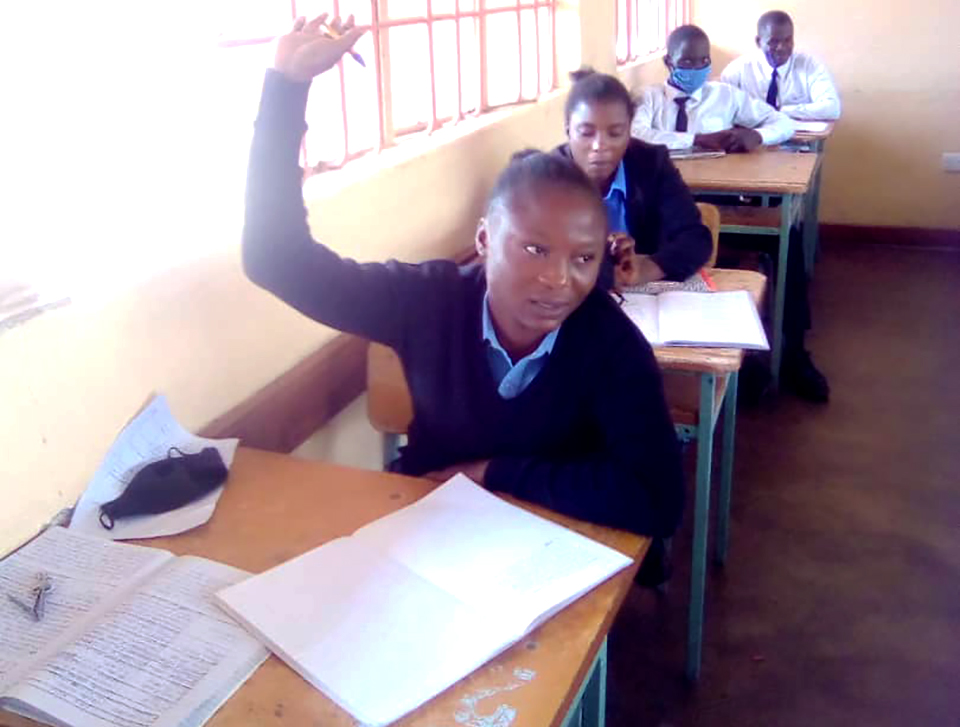 Violet is a child marriage survivor in Chama district of Muchinga Province and a beneficiary of “Reducing Child Marriage in Malawi and Zambia,” programme, which is funded by the India, Brazil and South Africa (IBSA) Facility for Poverty and Hunger Alleviation through the UN South-South Cooperation (UNSSC).

The Programme is aiming to eradicate child marriages in Chama district and giving child marriage survivors a second chance at education.

“The IBSA Programme has helped me a lot because I was having challenges to find school fees to come here and did not even have school shoes or a school uniform but I have them now because of the Programme,” said Violet.

While her father is deceased, Violet’s mother is a farmer and could not afford to send her to school. She ended up married at 15 but left the marriage not long after due to the physical and mental abuse she experienced in her marriage.

“I was having problems with my husband so I decided to leave and go back to school. I also realised I was too young and was admiring my friends who were still in school,” she shared.

Children living in poverty are the most vulnerable to child marriage and girls from the poorest families are three times more likely to marry before age 18 than girls from wealthier families.

“The Programme is doing a lot of good for our girls because they are coming from areas where the poverty levels are high. I am commending UN Women for the way it has taken care of the girls through this project. The Programme has encouraged learners to work hard and attendance levels have really improved,” shared Chripine Mvula, Head teacher at Kapalakonje Primary School in the remote Muchinga Province district of Chama in Zambia.

UN Women emphasises that the prevention and reduction of child marriages requires strong national commitments, legal instruments and institutional enforcement mechanisms joined by awareness at the community level. In Zambia, the Programme which is at pilot phase, has been running since October 2019 and is implemented in close partnership with relevant government ministries such as the Ministry of Cultural and Traditional Affairs, the Ministry of Education, the Ministry of Community Development and Social Services, the Ministry of Justice and the Ministry of Home Affairs Civil Society Organisations (CSOs) and UN agencies.

UN Women Zambia Programme Coordinator, Annie J. Sampa says a key objective of the Programme is the review of Zambian legislation and policies that impact either on preventing, mitigating or otherwise affect child marriages in any way in Zambia. She confirms that this objective has been achieved. “We are in the process of using the outcomes of the analysis to conduct a Training of Trainers workshop next week in Mpika for officers in the target districts which is Chama and Mpulungu. These are the districts with the highest levels of child marriage at 43.5 and 44 percent respectively,” Ms Sampa explained.

Chama and Mpulungu are the only two districts that have so far been covered under the Programme as UN Women wanted to manage the most affected areas first. The pilot period was also being used to make synergies with other institutions working on ECM in Zambia so that efforts are not duplicated.

“These girls’ school fees have been paid for through the UN Women IBSA program which is supporting child survivors in having a second chance in education. The child marriage survivors are registered in 17 schools in Mpulungu and 17 schools in Chama,” Ms Sampa proudly shared. And 236 bicycles are in the process of being procured for girls living more than 5 kilometers from their schools as per guidance by the Ministry of Education policy.

With parental consent, a girl can marry at as young as age 16 in Zambia according to customary law.

The highest rates of the practice in Zambia are presently in Northern Province, Muchinga and parts of the Copperbelt Provinces. The Population Council and United Nations Population Fund (UNFPA), list the districts of Isoka and Chama in Muchinga Province and Masaiti, Mpongwe and Lufwanyama in the Copperbelt Province as ‘hotspots’ or districts where the practice is most likely to occur ranging from the probability or likelihood of 0.158 to 0.170.

Poverty is among the top distinctive root causes of child marriage in Zambia as in other regions of the world. According to Zambia’s Seventh National Development Plan (7NDP), by 2015, 8.5 million people lived in poverty out of a national population of 15.9 million, with 3.5 million people living in extreme poverty.

Other causes of child marriage in Zambia include cultural norms that can sometimes be rooted in harmful practices or beliefs, gender inequality and inadequate legislation to protect the girl child.

The Population Council and UNFPA list some of the effects of child marriage as perpetuation of poverty, education deprivation for girls, health risk creation and increase in girls’ vulnerability by putting them at risk of negative sexual and reproductive health outcomes, including early pregnancy, exposure to HIV and other STIs and increased discrimination. Additionally, child marriage puts girls at risk of sexual, physical and emotional gender-based violence.

The two organisations also note how child marriage affects more girls than boys. This reality is backed by evidence from the Central Statistical Office of Zambia (CSO) that among 15 to 19 year old adolescents, 16.5 percent of girls are married compared with one percent of boys and among 20 to 24 year olds already married, 31.4 percent of females were married before age 18 as compared with only 2.2 percent of males.

Having recognised that ending child marriages goes merely beyond educating survivors, UN Women has partnered with Dynamic Technology Limited (DYTECH), a Zambian agribusiness company, to support the financial training of the families of child marriage survivors.

Through this partnership there are aims at empowering  at least 50 percent of families with child marriage survivors from a honey selling business. An initial 100 families have been trained and will be given beehives before the end of August. The planting of avocado trees has also been started under the same Dytech Programme.

“We are teaching families and women how to be financially sound and to re-invest the money from the sale of honey so that they are financially independent,” explained Dytech Limited co-founder, Patrick Mapalo.

As part of its national response to child marriage, the Zambian government launched a multi-stakeholder anti-child marriage campaign. This includes the combined force of key line ministries in Zambia such as the Ministry of Gender working with Ministries of Cultural and Traditional Affairs, Education, Community Development and Social Services, Justice and Home Affairs. The campaign is strongly supported by traditional leaders and Civil Society Organizations.

Related News
30/11/2020
Providing scholarships to improve the enrolment and retention levels of child marriage survivors and girls who have dropped out of school due to early pregnancies in rural Zambia
22/06/2022
UN WOMEN PARTNER WITH UNICEF IN CAMPAIGN AGAINST CHILD MARRIAGES
03/12/2021
Launch of the 16 Days of Activism against Gender-Based Violence campaign: Burundi warns corrupt administrative and judicial authorities who push for out of court settlements in violence against women and girls cases
19/11/2021
16 women championing the fight against Gender-Based Violence in East and Southern Africa
17/11/2021
Annulling one child marriage in Malawi, giving hope to many girls
END_OF_DOCUMENT_TOKEN_TO_BE_REPLACED