A community-based network of women in Mufindi, has teamed-up with UN Women in Tanzania, Unilever Tea Tanzania and the Local Government Authority in a campaign that is fighting to end violence against women and girls in the district. 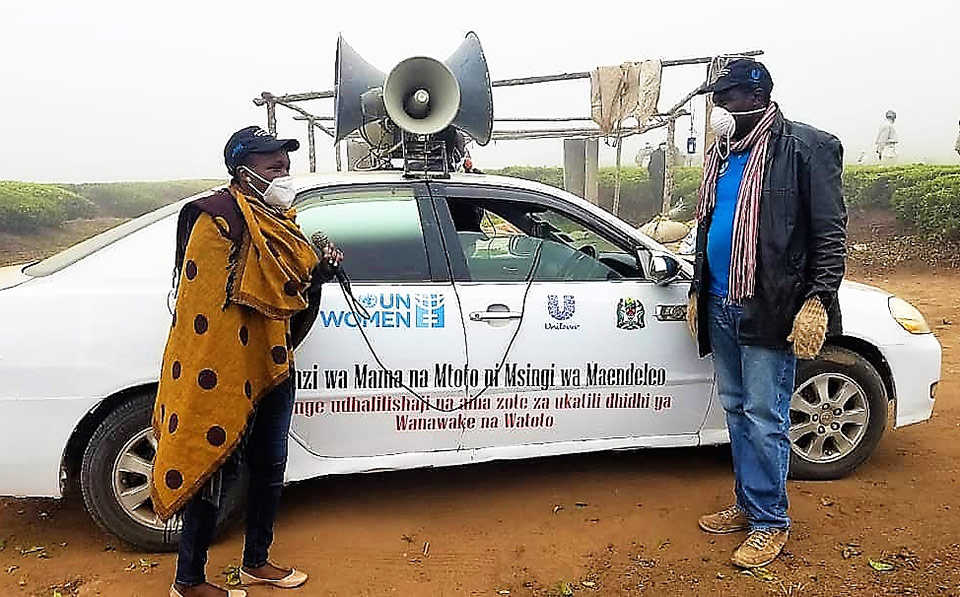 This campaign is also ensuring that women actively participate in COVID-19 prevention and recovery efforts in Mufindi, a rural district situated in the highlands of Iringa region, best known for its high-quality organic tea plantations and good timber for export.

One of the young leaders in the Mufindi Women’s Network, 28-year-old Ms. Stella Nziku, said she decided to join the network  following the outbreak of COVID-19 in March.

She had seen how the pandemic had started making women and girls more susceptible to various forms of violence, “I knew that that the cost of  gender blind interventions that excluded women would be very high,” she said adding that the situation reminded her of the experience she went through following the death of her husband a few years ago.

“The violence I endured occurred behind closed doors, and so it was considered both a domestic and a private matter that should not be reported to non-family members. Reporting what was happening to me was tantamount to washing my family’s dirty linen in public, which is a cultural taboo. After the death of my husband, I became a victim of  psychological and economic violence when some relatives grabbed all our properties. Because of my tough experience, I did not want to see women and girls going through similar psychological pain, as a result of the effects of the COVID-19 pandemic,” she said.

This women-led campaign is part of the UN Women and Unilever Tea Tanzania’s Women Safety partnership, launched in 2019 in Mufindi, to run a series of gender-based violence training sessions and awareness-raising activities targeting 6,000 workers, their families and 1,000 women smallholder farmers from the local community.

Despite the initial implementation plans and targets, the COVID-19 emergency presented an urgent need to innovate earlier awareness raising strategies to better support the prevention of gender-based violence and COVID-19 at Unilever Tea Plantations and in the local community, exceeding the targeted 1,000 smallholder women farmers.

In March, UN Women and Unilever mobilized the local government authority, including the district social welfare department, to support the training of champions and development of awareness raising materials to spread the messages of peace in the home and within communities. The messages are still promoting the leadership and active participation of women and girls in the anti-gender-based violence campaign activities, in addition to supporting gender-responsive recovery to COVID-19.

Ms. Immaculate Malile, 28, is one of the champions and network members at the forefront of educating local communities on the dangers of gender-based violence.

“Collaborative efforts that are inclusive of women in decision making can help to effectively support GBV survivors. We are happy that the UN Women and Unilever project is giving women the opportunity to lead the advocacy on GBV prevention,” Ms. Malile said.

In partnership with UN Women, Unilever and local government officials, the network is leading awareness raising on gender-based violence in 33 villages of Mufindi, and also supporting campaigns held at the Unilever Tea Plantations. This support on the tea plantations follows the ease of mobility restrictions, which have seen scores of women returning to work under strict observation of COVID-19 precautionary measures such as social distancing.

The UN Women Representative, Ms. Hodan Addou said following the outbreak of COVID-19, the partnership transformed its approach to promote the leadership of women at community level, and to also ensure that women actively participated in initiatives aimed at addressing the social and economic impact of the pandemic on women and girls. 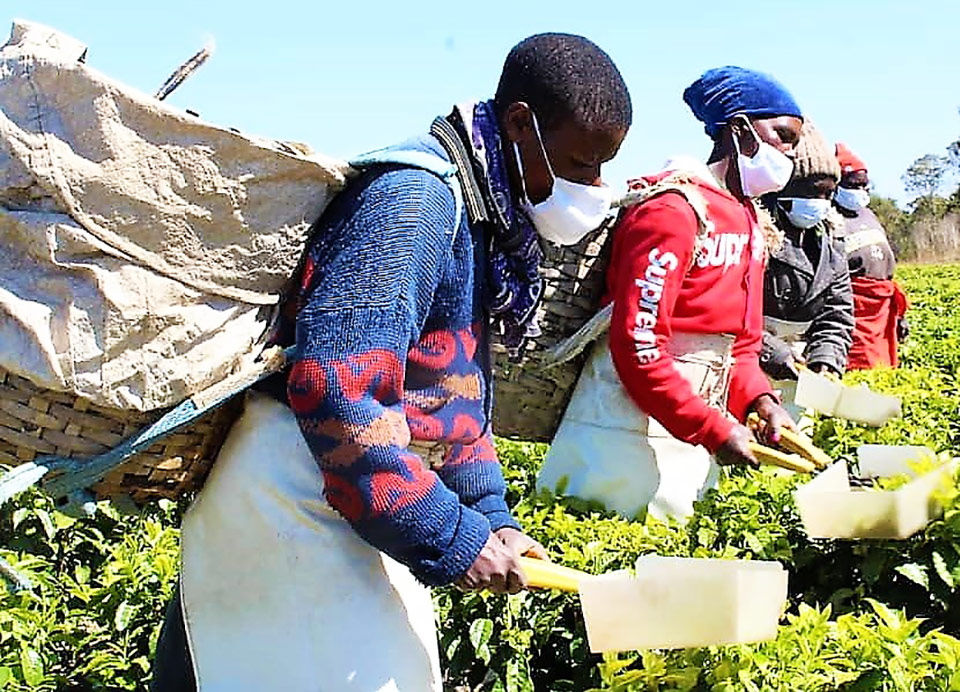 The UN Women and Unilever partnership with the Mufindi Women Network and the local government is ensuring that women working on the Unilever Tea Plantations are safe from COVID-19. Photo by UN Women.

“UN Women and partners are supporting this women-led campaign to promote efforts working to build back better in the context of COVID-19 recovery in Mufindi. We are encouraged by how the network is supporting and reassuring survivors to speak out and to seek services for psychological, health and legal support. We are also seeing that the women leadership approach is inspiring more women and girls to join this partnership and to contribute to our efforts aimed at creating a district free of violence, where women and girls can thrive and be more productive,” Ms. Addou said.

A General Manager at Unilever, Mr. Johnson Muhavile said his organization supported the construction of a police station in Kibao village to encourage reporting of gender-based violence cases.

“We would like this partnership to continue building the momentum through the introduction of new initiatives and to attract new partners. Our interventions package should include expanded capacity building initiatives targeting stakeholders such as police officers, local government officials, women and girls. This will help us to increase the number of people with knowledge on how to properly handle cases of gender-based violence for sustained prevention and response efforts,” Mr Muhavile said.

Ms. Secechela Dagaa from Mufindi district social welfare applauded the women champions for leading the campaign, emphasizing the need to scale-up and replicate the initiative in the rest of Iringa region.

“We should also expand partnerships to include more men and boys to enhance the quality of our interventions and impact. I believe this can help to speed-up progress in transforming perceptions and attitudes presenting some challenges to the effective implementation of existing national policies advocating for an end to violence against women and children in Tanzania,” she said.

Related News
22/06/2021
We need young women in strategic positions to significantly push the needle for gender equality
02/06/2021
UNFPA and UN Women review progress on delivering on a more equal future for women and girls in Singida and Shinyanga
25/05/2020
UN Women and Private Bank in Mozambique join efforts to advance women economic empowerment
24/08/2018
From where I stand: “Because I know my rights, I can speak up for myself and for other women”
24/06/2022
Building resilience in Kalobeyei Integrated Settlement
END_OF_DOCUMENT_TOKEN_TO_BE_REPLACED