A few weeks before the Generation Equality Forum in Paris, the UN Women Executive Director, Dr. Phumzile Mlambo-Ngcuka visited Tanzania from 27-28 May. The purpose of her visit was to stir up support and mobilize stronger commitments to the UN Women global campaign, Generation Equality: Realizing Women’s Rights for an Equal Future. During her visit, she met President Samia Suluhu Hassan, who embraced the Economic Justice and Rights Action Coalition of the Generation Equality campaign, and held some discussions with young women, high profile private sector business executives, and development partners and donors.

Her visit started on a high note – from the Julius Nyerere International Airport in Dar es Salaam, where she was welcomed by the Minister of Foreign Affairs, who is also a Steering Committee member of the African Women Leaders’ Network, Ambassador Liberata Mulamula, alongside the UN Women leadership in Tanzania. Discussions on how to mobilize greater support for the Generation Equality campaign started immediately as the team exchanged notes on the Executive Director’s schedule. It was a tight schedule, and just a few hours after her arrival, she met- with representatives from the private sector, donors and young gender activists who laid a perfect foundation for Dr. Mlambo-Ngcuka to build a stronger case on why all stakeholders should be on board the Generation Equality campaign.

The meeting with development partners was organized by UN Women Tanzania in partnership with the French Embassy and the Tanzania Private Sector Foundation (TPSF). It facilitated sharing of information about the Generation Equality campaign, promoted the commitment making process, and mobilized actors to participate in the Paris Forum to be held from 30 June to 2 July this year. 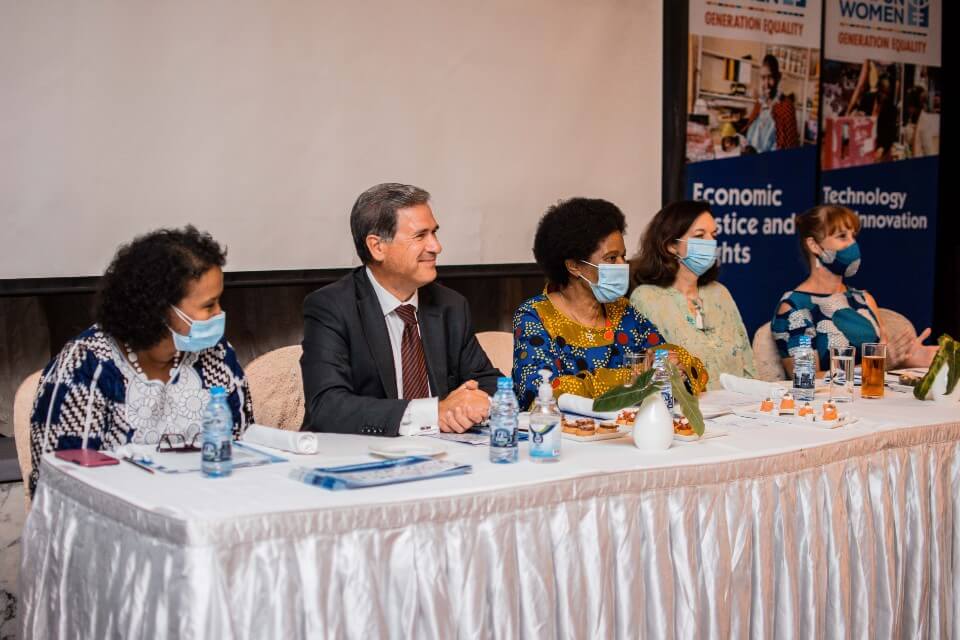 From one speaker to the next, it was crystal clear that the Generation Equality campaign cannot afford to leave anyone behind if its objectives are to be realized. The UN Women Representative in Tanzania, Ms. Hodan Addou told the stakeholders that the Tanzania Country Office has been holding a series of multistakeholder dialogues, under the global campaign. “Many of the organizations and embassies present here have been instrumental in localizing the global Generation Equality campaign to be relevant to the Tanzanian context and we are grateful for that support,” Ms. Addou said.

She added that localizing the campaign has presented opportunities to amplify young voices to enable views of young women and young men to be heard on issues related to equal gender representation at all levels. “It is our hope that through the campaign, we will continue working to increase the education of women and girls in Science, Technology, Engineering and Mathematics (STEM) and training for all, ensure safe education, and workplaces free from gender-based violence, close the gender pay gaps at all levels, and preferential procurement for women-owned businesses with a focus on rural and peri-urban areas,” Ms. Addou said.

Of interest was a compelling argument on why practices that promoted men to dominate corporate boardrooms, were no longer good for business.

There were also some success stories shared to demonstrate why inclusivity is now more profitable, and the new norm if the private sector is to remain on top of its game.

For example, in 2020, Tanzania’s largest financial institution, the National Microfinance Bank (NMB), which is headed by Ms Ruth Zaipuna, scored a profitability rate of 200 billion Tanzanian Shillings, the highest ever in the history of the banking sector in the country.

Soon after her appointment as the NMB Chief Executive Officer in 2020, she was able to steer the bank to greater heights under extremely difficult COVID-19 conditions. The NMB’s success story goes without saying that “when women are in executive positions, companies make more profit.” Ms. Zaipuna said when given the opportunity, women are capable of achieving great success equal to that of their male counterparts.

In her presentation, Dr. Mlambo-Ngcuka said despite “some positive changes” in the status of women and girls in Tanzania, and at global level, in the last 26 years after the Beijing Platform for Action, progress has been slow. It is for that reason that UN Women launched the Generation Equality campaign, to promote multi-stakeholder partnerships that can attract more resources to speed-up the pace of change in gender equality and empowerment of women.

“Since the Beijing Platform for Action blueprint came to effect, UN Women has collaborated with governments and other partners to create enabling conditions aimed at promoting the rights of women and girls through legal, policy and programme interventions.”

The areas supported over the years include women’s and girls’ education, women’s economic empowerment, women’s leadership, prevention of gender-based violence and harmful practices such as the female genital mutilation and child marriage, and prevention of maternal mortality. “But there is still more work to be done! We need more investment, and expanded partnerships and programmes to accelerate the pace!” she said.

The Generation Equality campaign sets UN Women on a new trajectory through its focus on intergenerational partnerships and the promotion of young people in the gender equality movement.

Dr. Mlambo-Ngcuka said UN Women is now expanding its interventions to prioritize the inclusion of young women and young men in programmes and innovation, “because young people have a longer-term approach to the formulation of their strategies and design of programmes.”

She said, “The majority of the citizens in most countries are also young, hence the need to have young women in strategic positions and decision making to significantly move the needle for gender equality .” Young people have also made it clear, she said, “They want to co-create, they are not the leaders of tomorrow but of today, and they want older generations to give them a chance. This is their time. We know what we need to do in our different spaces, including the private sector, for significant progress to be achieved. As for me, I take my hat off to the young people,” Dr. Mlambo-Ngcuka said. 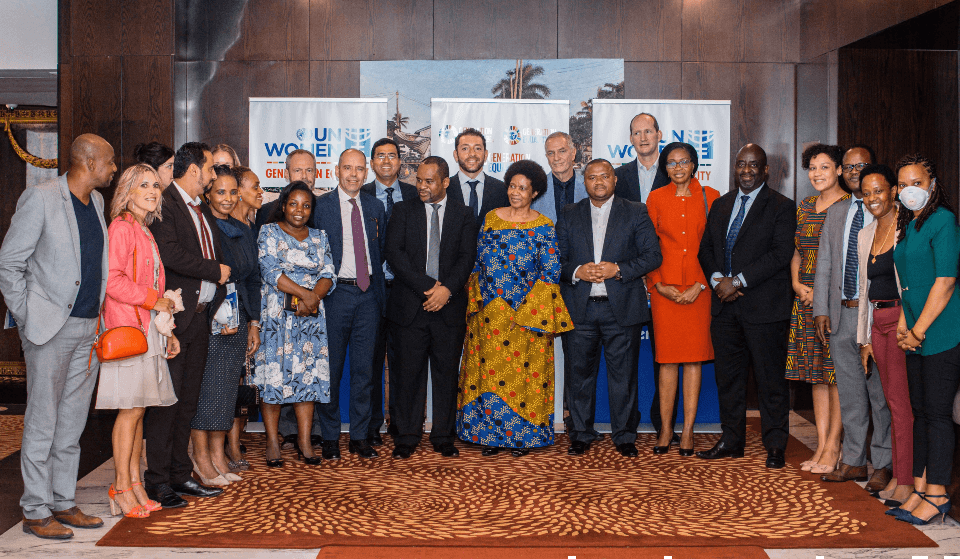 Representatives of the private sector, donor community and women’s rights and youth-led organizations who met with Dr. Mlambo-Ngcuka during her visit in Tanzania. Photo: UN Women/Tsitsi Matope.

While young people are critical for the continuity, sustainability and realization of the campaign’s objectives, Dr. Mlambo-Ngcuka also emphasized the need to better finance the campaign and ensure that the private sector does more to engender their programmes, policies and advocacy, working closely with the government and other partners..

Through the Generation Equality Forum convened by UN Women and co-led by the governments of France and Mexico, Six Action Coalitions and commitment making provisions are open to member states, the private sector, women’s rights groups, civil society, philanthropies and other stakeholders to intensify pushing the agenda forward. The UN Women Executive Director invited the private sector to participate in the Paris Forum and advocated for a collective commitment offer to scale-up contributions and support efforts to build back better.

“We need to ensure that all interventions will create lasting change for women and girls,” she said adding that the outbreak of COVID-19 had exposed some fault lines in social protection and health systems. “The pandemic was even more vicious on women and girls, and sectors where we have a high concentration of women such as the tourism and informal sectors.”

She stressed investing in making economies more resilient to crises to enhance the protection of women and girls. “The new normal must be really new, and that demands all hands on deck, and all actors to be as creative and innovative as possible to ensure significant progress in gender equality.”

During the meeting, the private sector committed to expanding their programmes to enable the creation of new opportunities for women in decision making, improvement in their social responsibility initiatives to support women’s and girls’ education in STEM subjects and mentorship, as well as investing more in technology, innovation and business skills transfer to promote businesses led by women, including small enterprises in rural areas.

Watch Dr. Phumzile Mlambo-Ngcuka speak during her visit to Tanzania

Related News
28/06/2021
Generation Equality Take Five: Women have so much potential that can be leveraged for the development of our communities
09/09/2021
UN Women Promotes Women Smallholder Farmers and Tackles GBV in Singida and Shinyanga Regions
13/07/2021
Technology and Innovation for Gender Equality: UN Women Rwanda unveils the Youth potential ahead of Generation Equality Forum in Paris
04/06/2021
Rising Woman Shelter and Wellness Centre provides refuge to survivors of violence and trafficking
02/06/2021
UNFPA and UN Women review progress on delivering on a more equal future for women and girls in Singida and Shinyanga
END_OF_DOCUMENT_TOKEN_TO_BE_REPLACED