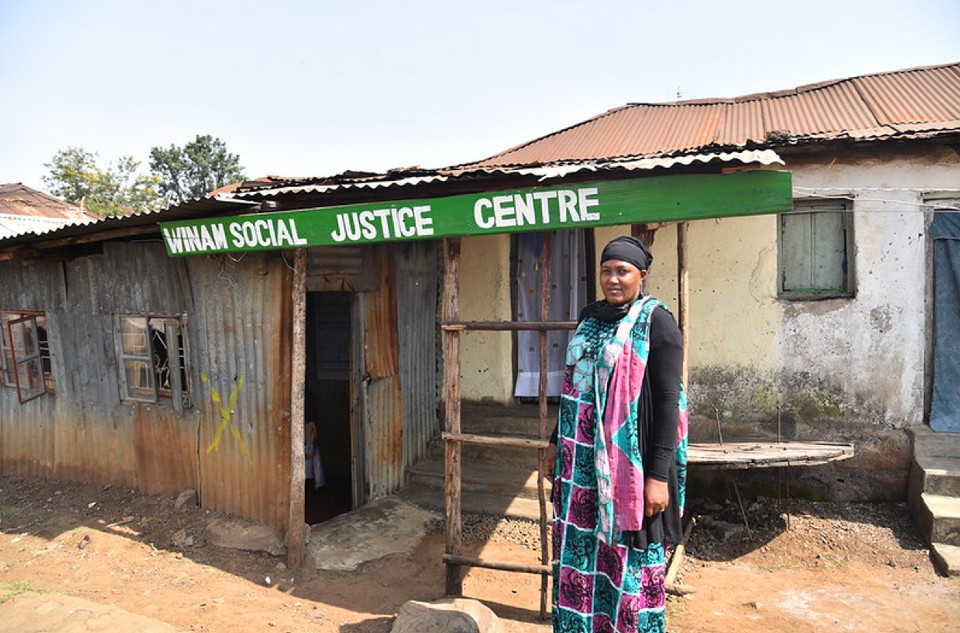 Fatuma Wambui standing outside the Winam Social Justice Centre (SJC), Kisumu. Winam SJC was one over 10 SJCs that has received support from the UN Women and OHCHR project since 2019. Photo: UN Women/Luke Horswell

Election periods in Kenya mean increased violence and a surge in sexual and gender-based violence (SGBV) cases. With support from the Government of Italy, UN Women Kenya and the Office of the High Commissioner for Human Rights (OHCHR) have been targeting both prevention and response to violence against women during elections (VAWiE) in Western Kenya and Nairobi since 2019. One of the major objectives of the project is to strengthen human rights defenders (HRDs) – community volunteers that assist those who have suffered human rights violations.

“The key issue is a lack of power. A lack of power equates to increased vulnerability,” explains Fatuma Wambui. Wambui is a volunteer in the Winam Social Justice Centre, located in Kisumu Town. A survivor of domestic violence herself, Wambui has been supporting her community for over 15 years, trying to protect others from having to go through her experiences.

“During the 2017 elections I handled 19 cases of SGBV. They’ve been reported to the Independent Policing Oversight Authority (IPOA) but the perpetrators are the police. None of these cases have been completed. We’re now heading to the next elections, and nothing has happened. The survivors are still receiving psychosocial support. They’re still being intimidated and not being believed. It can be such a long process.”

With 2022 general elections fast approaching, it is important to ensure that the survivors’ participate in the prosecution of these cases without apprehension of their safety and that their rights are protected throughout the cases until they are completed.  Beverline Ongaro, Human Rights Officer of OHCHR working with UN Women in the project explains,‘One of important component of the project entails interfacing the survivors’ with police, prosecution and IPOA so that they undertake investigations  and prosecution of VAWiE from a survivors’ –centred perspective, uphold the dignity of the survivors and safeguard their rights and safety. The defenders are an important link between survivors and the justice actors in the pursuit for justice.’ 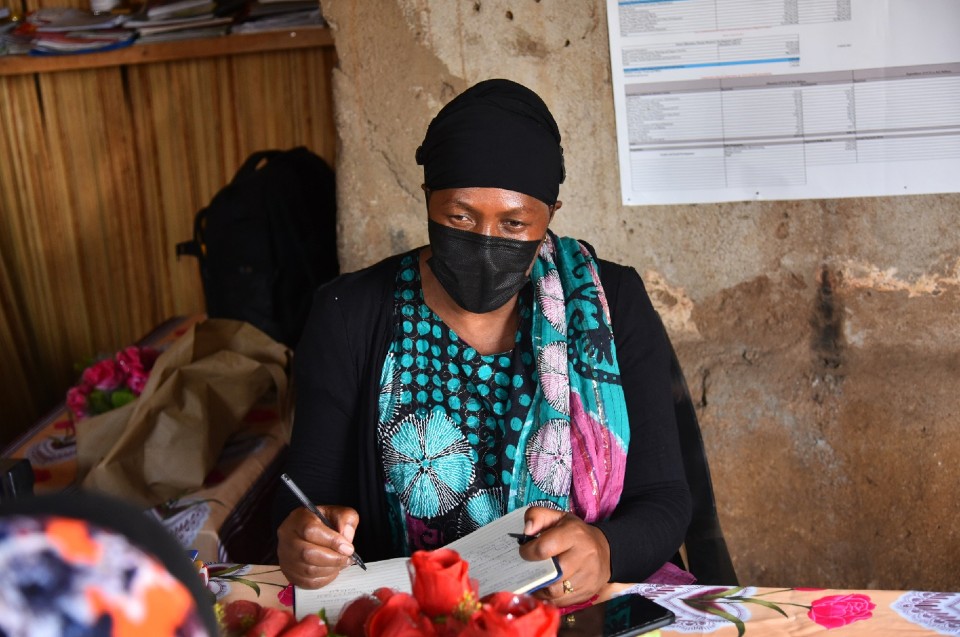 As Kenya heads towards its next national elections in 2022, the project is building up community-led social justice centres to appropriately deal with cases. Wangechi Kahuria, UN Women Kenya Ending Violence Against Women (EVAW) Specialist explains that, “one of the critical components of the project is to empower the community in SGBV response. They are often the first responders and should therefore be equipped to deal with cases. This means training on managing survivors of SGBV, understanding the referral pathway from a legal perspective, but also ensuring the HRDs themselves have support to avoid burnout.”

In remote parts of Kenya, cultural norms are deeply embedded and decision-making is often sought from the village elders – and not the state’s own legal system. HRDs can create friction with the local community when they push cases through the courts.

“It is one of the most dangerous jobs to do in Kenya. You’re exposed to perpetrators, the police and the wider community. You need a hard heart. Cultural values in this region and human rights do not go together. There are parallel systems at work. We’re empowering women but according to many elders of the communities, we are inciting women against men.” 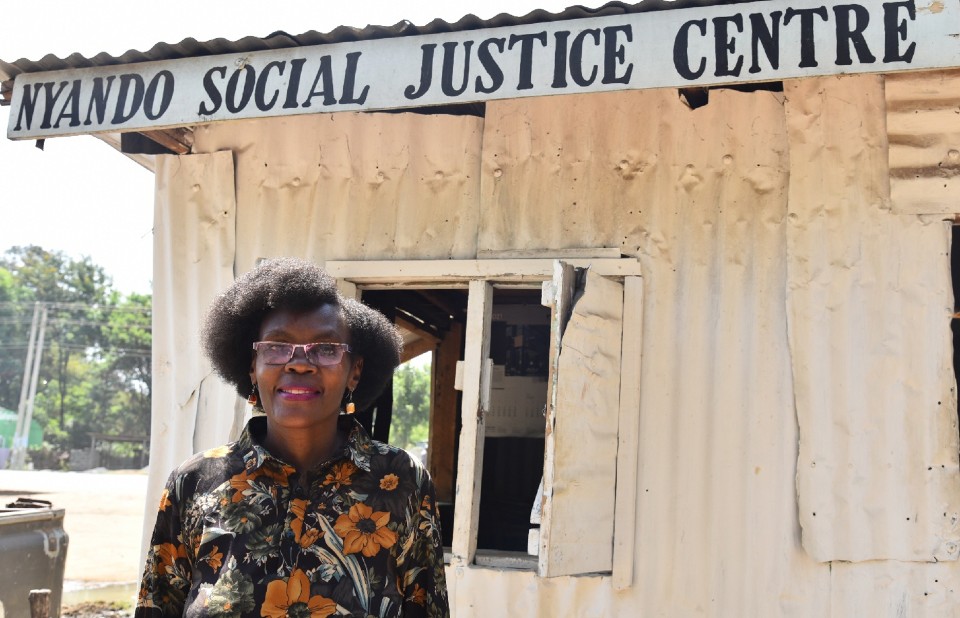 Caren Omanga has been a social activist for over 20 years, she now chairs the Nyando Social Justice Centre, situated 30km outside Kisumu. Photo: UN Women/Luke Horswell

Despite these challenges, the project has trained over 38 human rights defenders in four target counties in Western Kenya and Nairobi. Through this support, 555 SGBV survivors received counselling and accessed legal aid in 2020. Goretti Ondola is one survivor who has received justice. For over 20 years the family of her late husband subjected her to psychological abuse, culminating in a brutal attack which hospitalised her in 2020. She reached out to Nyando Social Justice Centre and, with Omanga’s knowledge of Kenya’s legal system and bravery to call out corruption, finally obtained land rights and a physical boundary that protects her and her son from her abusive family. 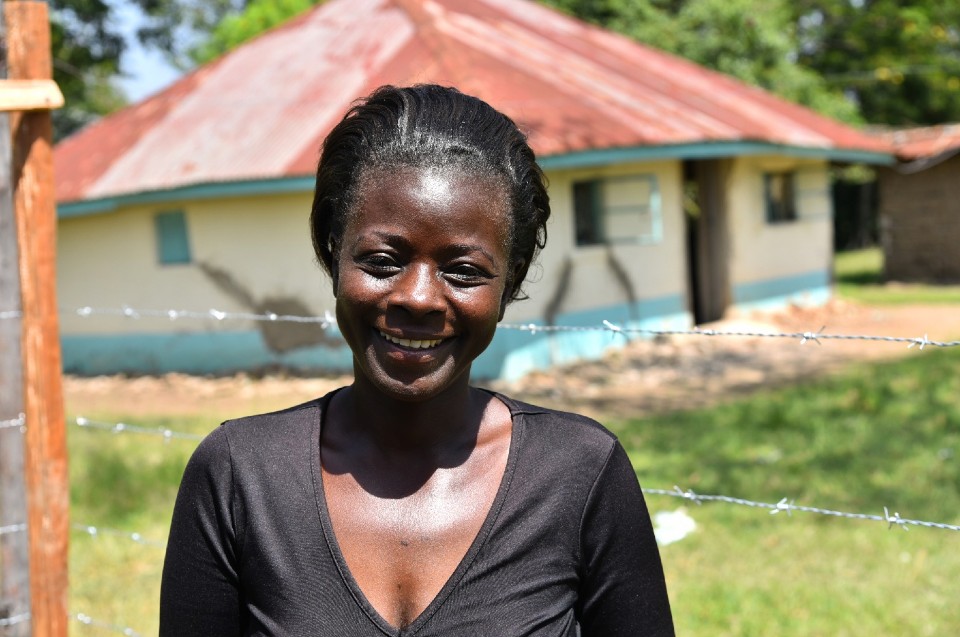 Goretty Ondola, 38 and widowed, finally received justice for almost 20 years of psychological and physical abuse from her late husband’s family. She now enjoys a small land title where she and her son a home, independence, and feel protected. Luke Horswell/UN Women

“The HRDs at the centre helped me get to the medical centre and report the case to the local police station. I was not comfortable going to the police. They did not want to support me. When I reported the case, it was difficult to arrest the culprits. I also learnt that one of the perpetrators had already contacted the police about the case,” says Ondola.

“It is like beginning a new life after 20 years, and my son is even more secure. During the day he would disappear to avoid being beaten. Now I’m thinking of planting some trees to safeguard the plot and building a poultry house. In our home, I want a kitchen to make life a bit more comfortable.”

The Let it Not Happen Again Project is supported by the Government of Italy in partnership with UN Women and UN Human Rights (OHCHR). This project approaches prevention and response challenges to elections-related violence on multiple levels. Ahead of Kenya’s 2022 General Election, it is strengthening grassroots organizations, such as HRDs, to support survivors access SGBV services while strengthening state mechanisms, such as law enforcement and the legal system, to increase conviction rates.

Related News
04/06/2021
Kenya's platform for action revealed ahead of Generation Equality Forum
03/02/2022
Kenya welcomes 50th signatory to the Women Empowerment Principles
23/12/2021
The Road to an Inclusive Economic Recovery: UN Women Rwanda facilitates a stakeholders’ dialogue on leveraging AfCFTA opportunities for women entrepreneurs
15/12/2021
Safety and Security in Public Transport a Major Concern for Most Women in Nairobi
07/12/2021
Don’t be a bystander: I don’t blame my parents, it’s the culture
END_OF_DOCUMENT_TOKEN_TO_BE_REPLACED