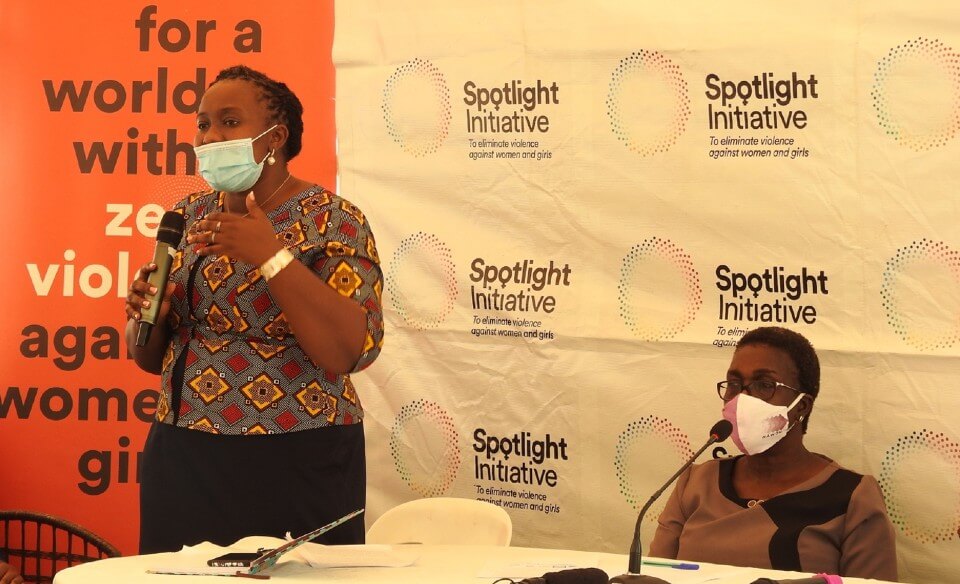 To celebrate International Women’s Day, on 10 March 2021 representatives of the women’s movement in Uganda held a press conference in Kampala to call on the government to double its efforts to advance the country’s health care system, family planning services, social security system, women’s participation in leadership, family and the economy, and to address violence against women and girls and other barriers that hold women back in the country.

In Uganda, the women’s movement partners with the European Union and the United Nations to implement the Global Spotlight Initiative. One of the six pillars of the Initiative aims to create a strong, vibrant, inclusive and active women’s movement in Uganda: UN Women leads this joint effort on the ground.

Reading from the press statement, Dora Kiconco Musinguzi said: “Women were engaged in the frontline of healthcare delivery and yet remained underrepresented in political decision-making processes.”

“There is an urgent need for policy review, formulation and enforcement to expand social security coverage and benefits. The women of Uganda call upon Parliament to expedite the passing of the National Health Insurance Bill, the Pension Bill, the Minimum Wage Bill and the Legal Aid Bill. There is the need to revise the National Social Protection Policy to expand provisions to informal sector categories.,” said Monica Emiru Enyou.

The statement also called the government to appoint more women in key cabinet positions and other public offices. The women’s movement acknowledges the impact of enabling laws and policies in increasing women’s participation in politics in recent years in Uganda. However, the last elections showed how, in politics like in other sectors, women have been hit hardest by the effects of the COVID-19 pandemic, as most women candidates did not have access to the expensive means of virtual campaigning.

In the economy, women entrepreneurs were hit hardest as the majority of women in Uganda are self-employed in the informal economy, making up an estimated 70 per cent of informal businesses.

“The lockdown affected mainly women and children trapped with their abusive partners and guardians. Survivors of violence were unable to seek medical treatment, counselling, legal aid services due to financial and transport constraints,” said Tina Musuya.

As the women of Uganda are bearing the brunt of the pandemic while being in the frontline of the COVID-19 response, on International Women’s Day the women’s movement demands that the government hears their voices: “We demand to be heard. We will be heard!,” said Monica Emiru Enyou.