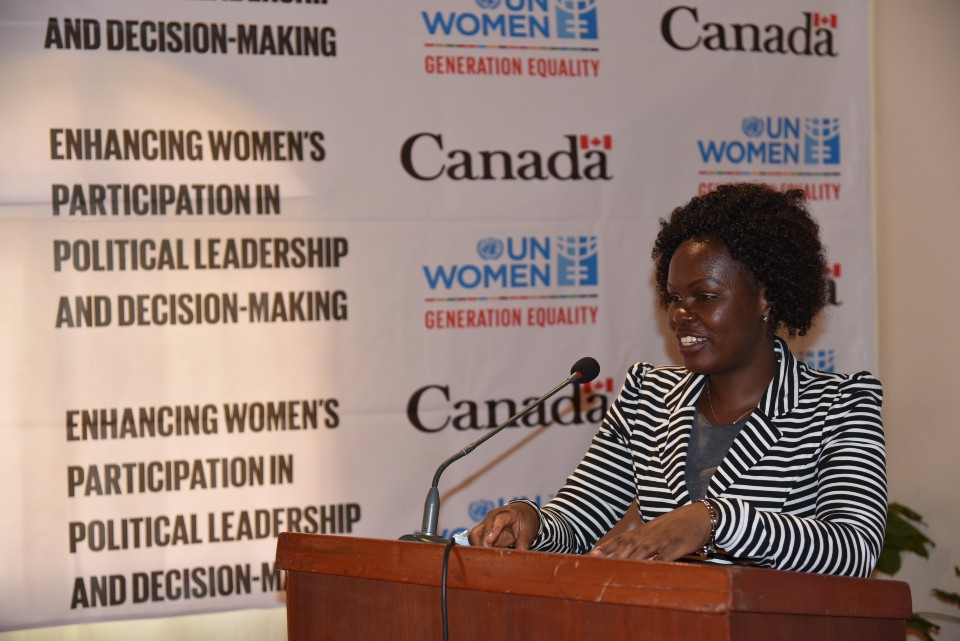 Only 21.8 % of Kenya’s national legislators are women. This figure lags behind other East African nations as well as the country’s own constitutional threshold. To achieve equal representation in political decision making, the project will focus on two elements:

UN Women Kenya Representative Anna Mutavati underlined the importance of the project for normative change saying, “In order to address the issue of unequal representation of women in Kenya’s political system, we must address both its structural barriers but also engage with cultural norms and barriers that exist in society. This project will better position aspiring leaders within Kenya’s political system while at the same time leverage the country’s mass media to re-shape outdated visions of women’s ability to lead.”

To support would-be leaders, one of the key initiatives of the project will be to air a second season of the ‘Ms President’ reality TV show. The upcoming production will challenge social norms and stereotypes that exclude women from leadership. The production will support female politicians to become more confident in their political careers, while showing viewers the strength and capacity of female political candidates. Planned for 2022, the show expects to reach over 3.5 million viewers through broadcast and digital platforms. This viewership, coupled with engagement with other influencers will help challenge traditional stereotypes of political candidates and encourage more diversity.

In Kenya, violence against women in elections (VAWiE) is a primary barrier to political participation as it undermines and discourages female aspirants from vying. The project will also support over 700 survivors of VAWiE by strengthening institutions responsible for prevention and response, such as law enforcement and health services.

The project embodies Canada’s Feminist International Assistance policy with High Commissioner David Da Silva noting, “this project, in collaboration with the Government of Kenya, UN Women, women’s rights organizations and women themselves, is so important! It will help to increase the number of women running in next year’s elections while also reducing gender-based violence related to elections. We know that when more women are involved in politics in Kenya – and worldwide – everyone will be better off.”

In total, the project will work directly with over 1,000 female aspiring and incumbent leaders with additional to support to marginalised groups, including persons with disabilities across seven counties including Embu, Homa Bay, Kajiado, Kericho, Kisii, Samburu and Wajir, based on, female peace committee members, survivors of VAWiE. Indirectly, key institutions such as KEWOPA, ORPP, IEBC, NGEC will also be engaged.

Related News
22/12/2021
From where I stand: “I am tired of Turkana being called a marginalized county. I want to change that”
04/06/2021
Kenya's platform for action revealed ahead of Generation Equality Forum
03/05/2022
From talk-shop to community action in Kenya’s local government.
28/06/2021
Generation Equality: The youth must be at the forefront of the battle against GBV and harmful practices
21/06/2021
Launch of UN WOMEN East and Southern Africa Regional Governance and Leadership Reference Group
END_OF_DOCUMENT_TOKEN_TO_BE_REPLACED