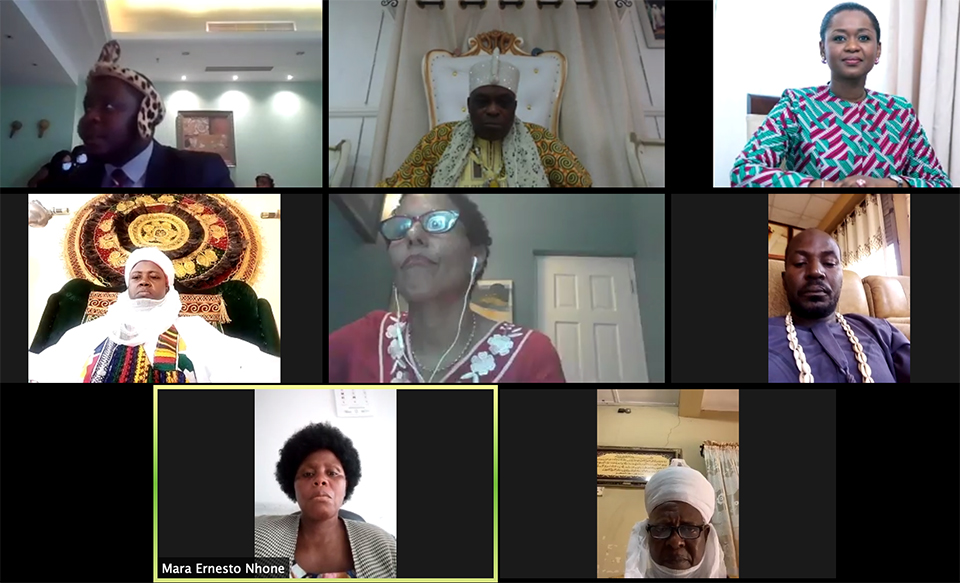 Mara Nhone, community leader from Mozambique who shared their work at country level to abolish child marriage and female genital mutilation. Photo: UN Women
The Council of Traditional and Cultural leaders of Africa, in partnership with UN Women and UNFPA have kickstarted a webinar series which will be held between August and December 2020 as a component of COTLA’s advocacy and actions to advance gender equality in Africa and end sexual and gender-based violence and harmful practices.

Noting that leadership is needed now more than ever, King Adedapo Aderemi pointed to the rise of violence against girls and the disruption of protection mechanisms and schooling in the context of the COVID pandemic. He reiterated COTLA’s commitment to zero tolerance for harmful practices against girls and women.

In her keynote address, Dr Phumzile Mlambo-Ngcuka spoke to the urgency to act now to stop the shadow pandemic that is devastating many lives of women in girls.  “There are many girls who are falling into the cracks during this challenging time of the COVID-19 pandemic. We are worried that many girls might not go back to school and we need to make sure that doesn’t’ happen. We need to act very quickly” she said. 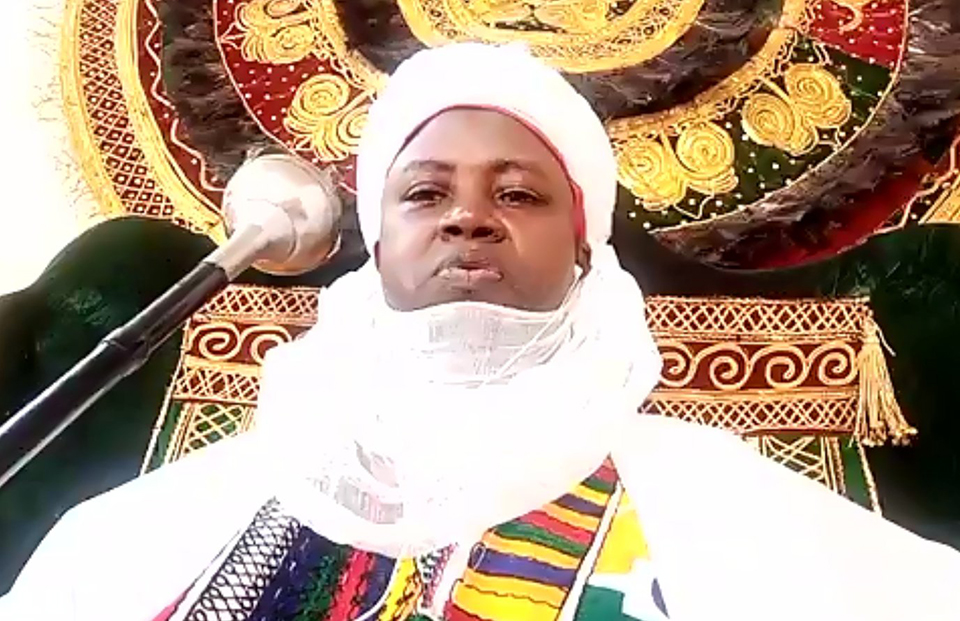 Chiara Adamo, the representative of the EU which is working with the UN system to provide resources to end violence against women and girls in 8 African countries through the Spotlight Initiative  called for “full involvement of key stakeholders: the governments, the civil society, the local and international institutions and of course the traditional leaders”.
Subsequently, HRM Mahaman Maiguzo Mansour, traditional of Tessaoua (Niger), HRH Dr. Haliru N. Yahaya, Emir of Shonga (Nigeria), the Paramount Chief Willard Mswati Gomani V (Malawi) and community leader from Mozambique Mara Nhone spoke to their work at country level to abolish child marriage and female genital mutilation in laws and practice. They reflected on the accountability of traditional leaders to champion transformational and progressive dynamism in culture, recognizing that culture and tradition should never be used to defend violations of the human rights of girls and women. 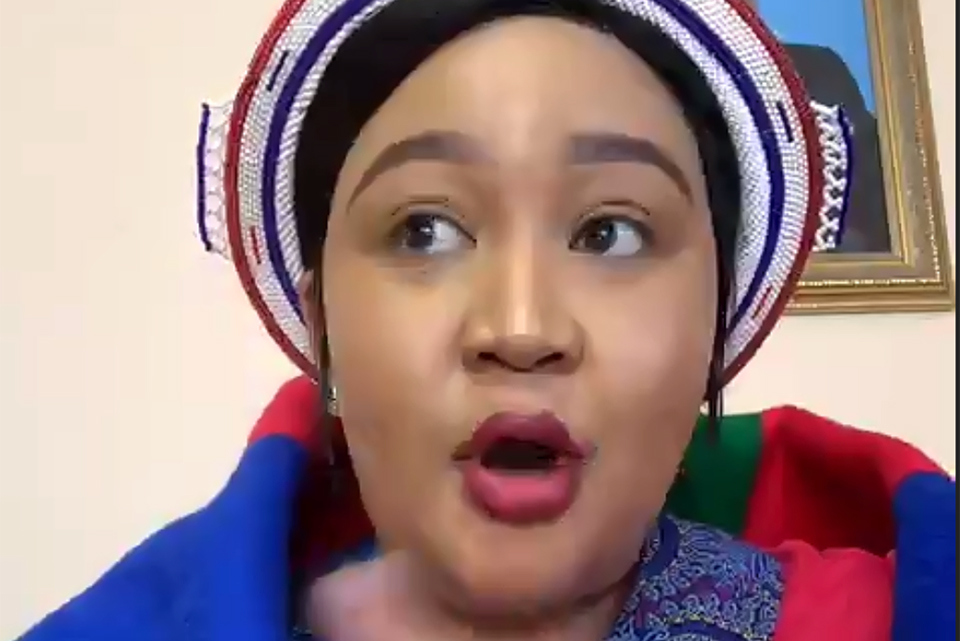 In her closing remark, Ndebele Queen Sekhothali Mabhena said “we need all to come together so that we can take informed and efficient actions and hold ourselves accountable”, she said.

Following a series of UN Women facilitated dialogue sessions with over 300 high level Traditional Leaders from across Africa held in Nairobi (Kenya), Blantyre (Malawi), Cairo (Egypt) and Lagos (Nigeria) in 2018, a pan African continental movement of progressive Traditional and Cultural Leaders – the Council of Traditional Leaders of Africa (COTLA)/ Conseil des Autorites Traditionnelles D’Afrique (CONATA) was created.  The movement aims to drive the transformation and eradication of negative cultural practices, customs and traditions to end child marriage, FGM/C and other harmful practices.  COTLA/CONATA was launched in Addis Ababa, Ethiopia in February 2019 by the President of the Republic of Zambia, His Excellency President Lungu, in his capacity as the AU Presidential Champion on ending child marriage.  UN Women supported the first steering committee meeting of COTLA in Lusaka, Zambia in October 2019, where traditional leaders deliberated on an action plan for operationalization of their collective vision and advocacy across Africa in ending child marriage, FGM and Harmful practices.  During the Lusaka meeting it was also agreed to register COTLA as an organization with its headquarters located in Nigeria.  With the recent conclusion of the registration process, COTLA members have reiterated their commitment to accelerate efforts to address Violence against Women, Child Marriage, FGM and other Harmful Practices that have increased manifold with the emergence of COVID-19.

The Spotlight Initiative is deploying targeted, large-scale investments to eliminate all forms of violence against women and girls in Africa, Asia, the Caribbean, Latin America and the Pacific.  The Spotlight Initiative regional programme in Africa provides a regional response to addressing sexual gender-based violence, harmful practices and sexual and reproductive health and rights. The programme puts a special focus on partnership with the African Union and empowering women's movements.
The Spotlight Initiative will accelerate actions to realize the achievement of SDGs in Africa and in particular SDG 5 “Achieve gender equality and empower all women and girls”, with its targets 1,2,3,6 and 9 with focus on “Leave No One Behind”.
The regional Spotlight Initiative, (which brings together the African Union, Regional CSOs, United Nations entities including UNFPA, UN Women, UNICEF, UNDP and other organizations) promotes access to quality, acceptable and accessible comprehensive multi-sectoral integrated survivor-centred services. The Initiative will also support the development of a GBV data management system, with common inter-sectorial databases. Most importantly, the Spotlight Initiative will make resources available to the regional women’s movement to monitor laws and policies, hold the government accountable and develop and implement sustainable programmes. It will also support traditional, cultural and faith-based leaders, men and youth organizations in their advocacy and programming.

Related News
19/11/2021
16 women championing the fight against Gender-Based Violence in East and Southern Africa
21/06/2021
UN Women supports family reconciliation and counselling for domestic violence survivors
03/12/2021
Launch of the 16 Days of Activism against Gender-Based Violence campaign: Burundi warns corrupt administrative and judicial authorities who push for out of court settlements in violence against women and girls cases
21/06/2021
UN Women and partners in Uganda provide access to justice for survivors of VAWG through the Spotlight Programme
06/04/2021
I am Generation Equality: Martha Clara Nakato, advocate for bodily autonomy and sexual and reproductive health rights in Uganda
END_OF_DOCUMENT_TOKEN_TO_BE_REPLACED